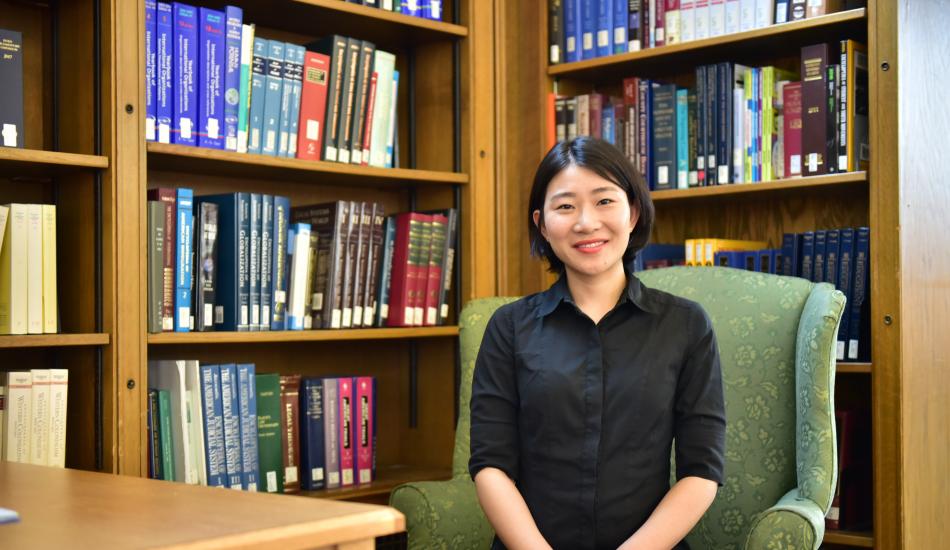 Yingzhi, then a student at Shanghai’s Fudan University, had applied to the program because of her interest in experimental economics and mechanism design. She had discovered that UMSI professor Yan Chen’s work in this area matched her research interests; Chen later became her advisor.

“Mechanism design is to come up with a mechanism that can allocate social resources in a way that maximizes social welfare,” Yingzhi explains.

At UMSI, Yingzhi has continued work she began in Shanghai, looking at the performance of a dynamic college admissions mechanism.

“The background is, we’re interested in the problem of matching students to colleges,” she explains.

In China, university admission is determined by students’ scores on the gaokao, a nationwide exam given once each year to prospective students. Each of the country’s administrative regions receives a quota of seats at each university, and students within each region compete for those seats based on their gaokao scores.

“Because students’ priorities are only determined by their gaokao scores, it’s really important to have an efficient and stable mechanism,” Yingzhi says.

Most regions in China use a constrained deferred-acceptance mechanism in which students must strategically choose a small number of schools to receive reports of their scores—the number of schools varies from province to province but generally ranges from two to six. With this system, students do not know the choices of other applicants when they select universities. If their scores are not high enough to be admitted to one of their chosen institutions, though, students are out of luck, relegated to second-tier schools.

Yingzhi’s project looked at a less studied system with a dynamic mechanism, currently used in only one administrative region of China, Inner Mongolia. “My question is how this dynamic system performs compared with other mechanisms.”

With the dynamic mechanism, students can see other applicants’ choices in real time, as well as those applicants’ gaokao scores, and revise their own choices. “So if you know a school has three seats, and your score is lower than the three people already there, you should apply somewhere else,” she explains.

This might reduce the chance that a student will end up in a school they don’t like.

The study found that when students’ preference correlation is low—that is, when there is more variety in what students see as good choices—the dynamic mechanism performs almost as well as the deferred-acceptance mechanism, an ideal but unfeasible unconstrained system in which students report a complete list of preferentially ranked schools rather than choosing only a few. It also performs better than the constrained versions currently used in most regions, which is why changing to the dynamic mechanism can increase the stability and efficiency of the allocations in low preference correlation cases, she says.

Yingzhi recently defended a paper on this project for her pre-candidacy and is now working on two new projects related to mechanism design. One will investigate the performance of the deferred-acceptance mechanism when students’ preference correlation varies. The other looks at how to reach efficient levels of contribution by changing group size in a non-linear voluntary contribution mechanism.

She plans to go into academia, ideally in an economics department at a top research institute.