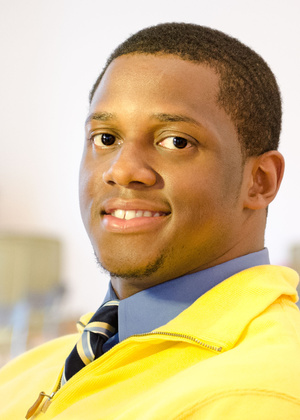 At Yale, he earned his undergraduate degree in history–plus three letters as a football wide receiver. A highlight of his Bulldog career was his team winning the Ivy League championship in 2006 with a victory over Harvard on its own home turf.

A man of many interests, Jarrett decided to try his hand at acting while in school and found he enjoyed performing. He produced a play at Yale and has had a few professional roles in videos and film. But academics won out over acting for the ever-practical Jarrett, and he’s preparing for a career as a university archivist.

It was at Yale that a university librarian suggested Jarrett might find archival work a good match for his interests and recommended UMSI. Michigan was a natural choice, both for its outstanding archival faculty and because the Gary, Indiana native has family in the Detroit area.

At UMSI, he combines his study in archives and records management with two part-time positions on campus: University Library Associate in Special Collections at the Hatcher Graduate Library and processing assistant at the Bentley Historical Library.

As a Spectrum Scholar and Emerging Archival Scholar, Jarrett carries a full conference schedule. In spring, 2012, he presented at the National Council for Black Studies in Atlanta and the Midwest Archives Conference in Grand Rapids. During the summer and fall of 2012, he will present at the Tupac Shakur Collection Conference in Atlanta and the Mid-Atlantic Regional Conference in Richmond, Virginia. He will attend the American Library Association Spectrum Leadership Institute in Anaheim, the Archival Education and Research Institute at UCLA and the Society of American Archivists meeting in San Diego.

“UMSI has supported me from day one,” says Jarrett, “and it’s made a world of difference. My whole experience here has been more than I ever expected.”