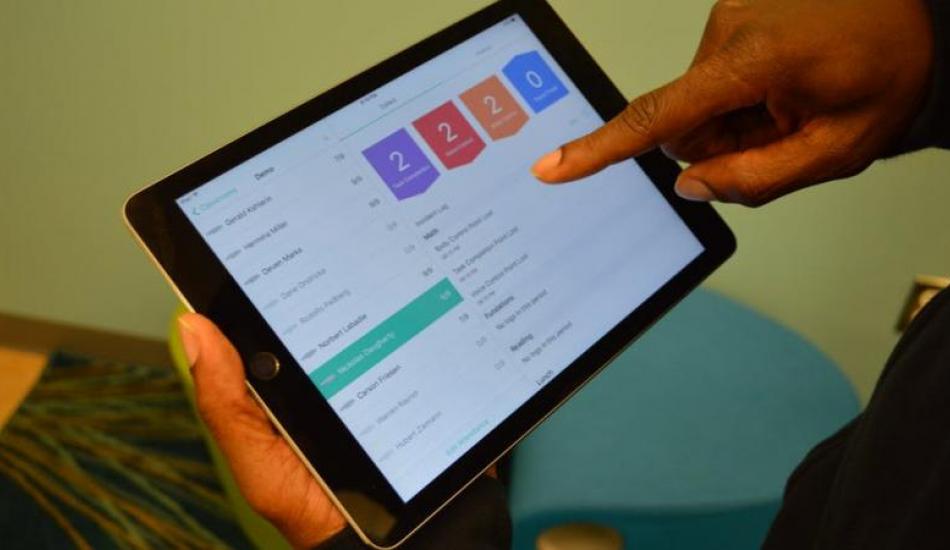 School districts are failing to accurately report when their most vulnerable students are being physically restrained or secluded. That’s according to a June 2019 report from the Government Accountability Office.

My response is: There’s an app for that. I know because I developed one.

I’m not an entrepreneur or founder of a startup. I am a scholar developing this app as part of my research studying how technology can help care teams work together. This includes designing apps for teams who work with children in special education.

It’s rare for America’s students to be secluded or restrained, practices that are meant to be used as a last resort. If a child is a danger to themselves or others, they may be secluded in order to isolate them from others in a separate room, or restrained by physically holding them to prevent their movement. These practices disproportionately affect students with disabilities. For example, of the approximately 61,000 students who were reported to have been physically restrained in the 2013-2014 school year, according to a 2019 federal report, more than 46,000 of those were students with disabilities.

What happens to these students during the course of a school day is of tremendous concern not only to the federal government, but also to parents. My goal is to provide free use of the app for as many schools as possible.

Parents not only have a right to know what is going on with their child at school; they are also a vital part of a child’s team and can help the child learn to manage their behavior. But parents of special education students aren’t always made aware of problems at school, which could potentially lead to their children being restrained or secluded.

For instance, a three-part investigative series by Oregon Public Broadcasting found that parents were not informed when their children were restrained or secluded “until long after” – in at least one case an entire year after the fact.

School districts are also failing in their requirement to tell the U.S. Department of Education the extent to which they use seclusion and restraint among special education students. The Government Accountability Office report states that 70% of the more than 17,000 school districts in the U.S. reported zero incidents of restraint and zero incidents of seclusion – a figure that the government says is improbable.

Districts with more than 100,000 students are “likely to have at least one incident of restraint or seclusion,” the federal report states. Yet, one-third of such districts – or 10 out of 30 – indicated they had no incidents of restraint and seclusion in the 2015-2016 school year. These districts included New York, Philadelphia and Fairfax County in Virginia.

Why are so many districts failing to report when they seclude or restrain special education students? The reasons are likely varied. But from my experience, the educators are most concerned with responding to student behaviors and trying to keep students safe. What I have observed is that in the moments when educators can’t juggle everything, the documentation is what gets dropped.

I first became aware of this problem in 2011 when – as a graduate student observing special education classrooms in Pittsburgh – I saw firsthand how teams of educators and others who work with special education students were struggling to document their students’ behavior. The educators told me it was important to document the students’ behavior to show how they were responding to the structure, support and feedback in school. But they were still using paper to document student behavior, and they found the process was tedious and time-consuming.

Even when student behavior was being recorded, it would be difficult to retrieve and review the information because it was located in three-ring binders or very abstract reports. For instance, a report might state that a student met a behavioral goal 70% of the time within a given month, but would not include details about why the student didn’t meet the goal for the other 30% of the time. Teams spent so much time manually transferring data from paper onto Excel spreadsheets, written reports or databases that they were burned out. They also didn’t feel they were able to capture accurate data.

So when the time came to actually make decisions about what each child needed, teams often didn’t use data because it was so difficult to retrieve.

Having a background in computer science, I believed it could be possible to make this process paperless – if we designed the solution right. I started the Lilypad Project and, together with research assistants and collaborators, began experimenting with designing and evaluating apps that make it easier for educators and others who work with special education students to do their jobs.

Our app is for documenting the behaviors of special education students, though it can also be used to document when students are secluded or restrained.

The first app that we designed enables the classroom staff to use an iPad instead of a clipboard for documenting behaviors in real time. A web portal allows the data collection interface to be customized and gives the rest of the team access to review the data. This allows teams to have more informed discussions about whether the child is responding to things they have tried, and to adjust the strategies they use as needed.

By swapping out their clipboard for an iPad, my research group gave them a portable tool that has enabled them to make the process as paperless as possible. The app also gives educators more space to write notes than the small paper forms they used to use. This has led educators to write more detailed notes than they did before.

The app has been used by nine teachers in two school districts – one in Pennsylvania and one in New Jersey. It is provided free of charge thanks to various grants I’ve been able to secure for my research, including a US$500,000 grant from the National Science Foundation to study cyber-human systems.

To help keep parents informed, I am currently exploring how the app we developed can be used to share information in real time with parents or others who are not in the child’s classroom every day. This could be done via email, text message or some other method.

By having everyone concerned with a child be able to look at the same accurate data, and have a common channel for communication, it should make it easier for parents and educators to figure out the best way to address that child’s needs.

Teachers have been using our app for two years. They have told me that switching back to paper would feel like going back to the Stone Age.

They also report that the app is saving them time. My research group is working on a formal study to measure just how much time is being saved.

Teachers have also told me they are excited about being able to generate different reports for principals and parents. I am currently looking into the best ways to share data with these other stakeholders, in a way that works for them.

I don’t yet have an app I can make publicly available. As a research project, we can only support a small number of users. When a teacher agrees to be a part of the Lilypad project and use one of our apps, my research group works with them to design a custom version of the app for their classroom, and this allows us to study their experience in adopting it. My goal is to take what educators say is most useful to them about the technology, and create one highly customizable app.

No app will solve the problem of schools not accurately reporting their practices. And no app will prevent the seclusion or restraint of students. In order for schools to document and tell parents and the federal government about how they are using seclusion and restraint, there has to be a sense of commitment at the highest level. And, unfortunately, there’s no app for that.