Parents of twins donate to UMSI, Kinesiology in honor of daughters 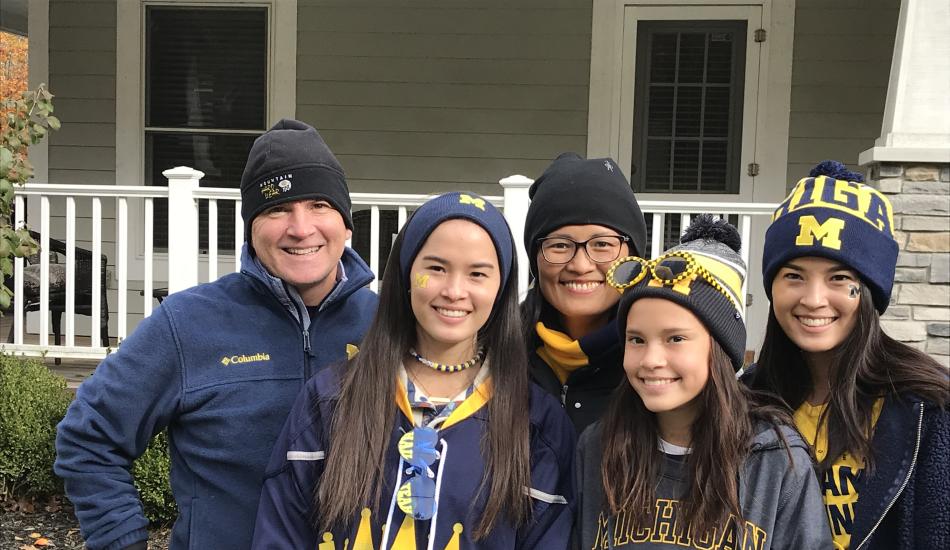 Before they could even walk, Kelsey and Kara Burke were sporting University of Michigan onesies. That’s why, decades later, the twins’ decision to attend U-M felt inevitable.

“Mike didn’t want to influence them, but it was obvious from day one,” says Lisa Burke. “We were having U-M tailgate parties and we were very much with U-M from the beginning.”

Mike Burke received his Bachelor of Science in Civil Engineering from U-M in 1989. Since graduating, he’s stayed connected with U-M, finding a community of alumni in California, where the family lives. Through the years, the family has frequently attended football games.

“I’ve always had friends from Michigan and known how useful the alumni connections are,” he says. “But having my daughters attend gave us a chance to go all in.”

Most recently, the Burke family made endowed scholarship gifts to both the School of Kinesiology and the School of Information. The Hong Burke Scholarship Fund will go toward helping UMSI students complete their education.

“We’re grateful to be in a position to help” Mike and Lisa say. “It’s something we are doing with Kara and Kelsey so they can remain connected to the University of Michigan as their careers develop, while paying it forward for others and helping them gain awareness of the importance of philanthropy.”

Learn more about opportunities for giving.