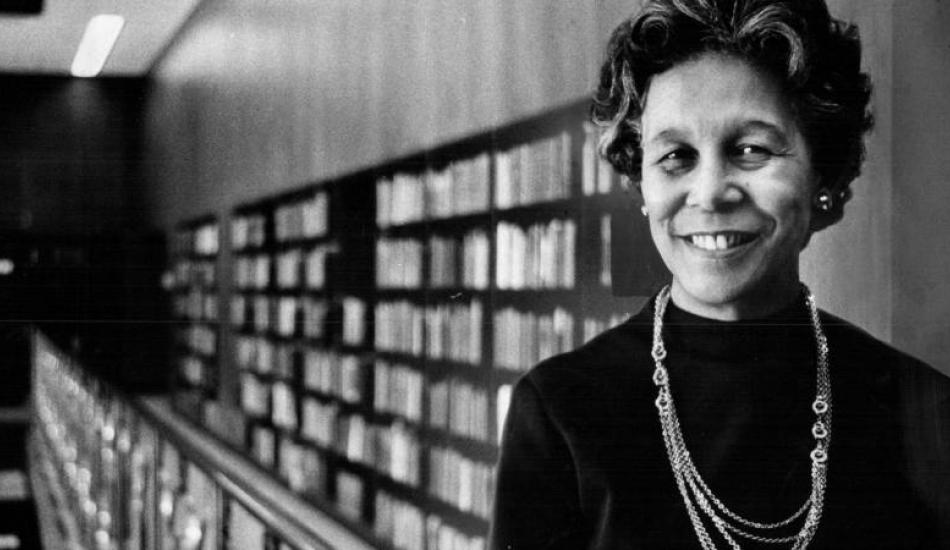 Clara Stanton Jones, an alumna of the University of Michigan School of Information (UMSI), will be inducted into the Michigan Women’s Hall of Fame in the historical category for her groundbreaking leadership as the first woman and first African American to serve as director of a major library system in the United States: Detroit. She was also the first African American president of the American Library Association.

The inclusion was announced today by Michigan Women Forward, which oversees the Michigan Women’s Historical Center and Hall of Fame in Okemos, Michigan. Jones will be formally inducted at a ceremony on October 18.

The announcement brought enthusiastic and proud responses from her alma mater and her family.

"We are delighted by the selection of our distinguished alumna, Clara Stanton Jones, to the Michigan Women's Hall of Fame,” said Thomas A. Finholt, UMSI Dean. “Clara's career of impactful leadership at both the Detroit Public Library and the American Library Association exemplifies our aspiration to prepare graduates who will change the world.

“We are grateful to Clara's family for their generous support of the School of Information in memory of their mother, Clara, and their father Albert D. Jones.”

Kenneth Jones lives in Baltimore and serves on the UMSI External Advisory Board. Upon learning that his mother was receiving this honor, he said, “We are pleased and proud that our mother is being recognized as the pioneering leader and complete woman that she was.”

Jones (ABLS ’38) is one of two inductees this year in the historical category. The other is Agatha Biddle, a Native American chief who in 1855 helped negotiate the 1855 Treaty of Detroit. Three other inductees are contemporary.

Clara Stanton Jones passed away at age 99 in 2012, leaving behind a barrier-breaking legacy in the world of public libraries.

In 1970, she became the first woman and first African American to serve as director of a major library system in the U.S., the then-105-year-old Detroit Public Library (DPL). In 1977, she became the first African American president of the American Library Association (ALA). She was appointed by President Jimmy Carter to the National Commission on Libraries and Information Science and served from 1978 to 1982.

During her 34-year career at DPL, she persuaded a reluctant ALA to pass the “Resolution on Racism and Sexism Awareness” in 1977. Her work to desegregate libraries, library services and overall library culture led to recognition as the first recipient of the Distinguished Service to Librarianship Award by the ALA’s Black Caucus in 1970 and the Trailblazer Award from the same group in 1990.

In Ann Arbor, Jones was chosen in 1971 to be an alumna-in-residence of U-M’s School of Library Science – now UMSI.  In 1975, she was honored by the university with the Alumni Athena Award for “excellence in her profession, altruistic and humanitarian accomplishments, and public and community service.”

She joined the staff at the Detroit Public Library’s main branch on Woodward Avenue in Detroit in 1944. Her 1970 appointment as Director came after a contentious vote during which more than 80 white Library Commission members walked out in protest. The headline following her election read “Negro Elected to Head Library System After Bitter Fight.”

Stanton Jones rose above this acrimony, and soon “won over many skeptics and asserted herself as a forceful leader,” according to a 1971 Detroit News article.

As impressive as her rise above racial barriers was, Jones also had extraordinary vision. Her innovative leadership changed libraries from simple book depositories into the information, resource and educational meccas they are today.

She first began these changes in 1973, when she told the ALA in a speech that most people didn’t use libraries, and that “public libraries can no longer depend on reading guidance as the only major adult activity.” Life was more complicated and people needed more than card catalogues, “namely, information and referral.”

Stanton Jones instituted a new service, The Information Place – “TIP” for short – in Detroit. This service answered the need, as Jones described it, for “guidance through the maze of social, legal, governmental and other agencies, regardless of socio-economic class.”

This was a tall order, and, as Jones adroitly stated, and “it is directed to librarians because we are the only ones who can do it right.”

After an enormous amount of work to set up the TIP service, DPL soon was fielding thousands of requests for information – everything from help with taxes to G.E.D. preparation, to advice on leader dogs for the blind, foster care, weed control, gambling addiction, and so on.

The TIP service was a model for public libraries everywhere, and remains active today at DPL.

For those who knew her and who know of her career, Stanton Jones always will epitomize librarianship. Despite the racism of her early career, she craved neither recognition nor revenge. Rather, she always cared about the institution itself.

As she said back in 1970: “I very strongly believe that libraries are at the heart of a civilization.”