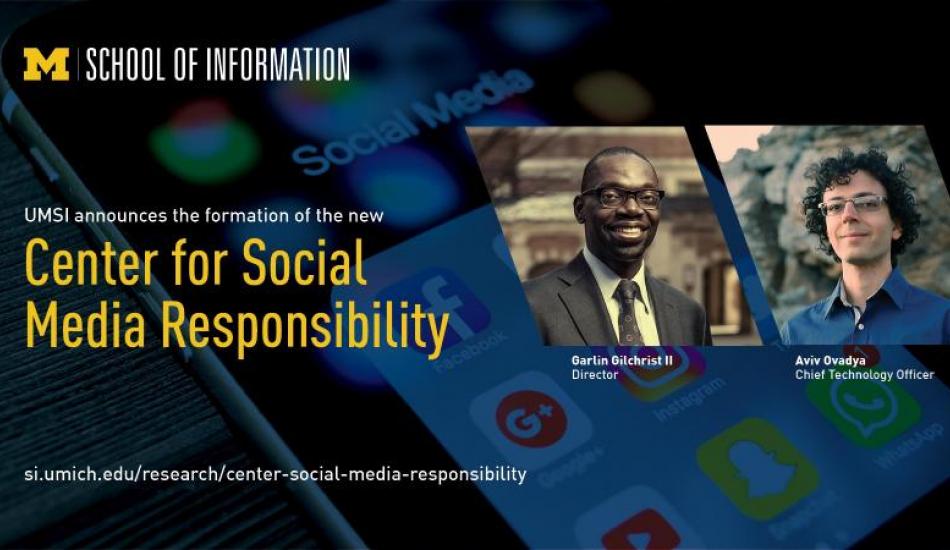 Google the words "fake news" and you'll find articles about made-up accounts of the recent school shooting in Florida, new evidence that false stories influenced the last election, and numerous references to the current president's accusations against media.

Dig a little deeper and find that the proliferation of fake news has moved beyond an assault on the integrity of traditional and social media to a real concern about how easy it is for anyone to manipulate the news people are reading and watching.

While Google itself and Facebook are among the web and social media corporations that have promised to crack down on fake news and other false information on the internet, University of Michigan School of Information experts say the problem is bigger than filters built into apps.

In fact, they are sounding the alarm on what they call an infocalypse, or information apocalypse, a state when fake news and altered videos on social media and elsewhere on the web effectively end social reality as we know it—something they warn is not far off.

To address this growing concern and bring some of the brightest minds together to brainstorm creative solutions, U-M has formed the School of Information Center for Social Media Responsibility, and hired one of President Barack Obama's former social media managers as its executive director. The center will build upon the school's strong global leadership in social media research.

"The Center for Social Media Responsibility is really a response to a unique challenge and opportunity," said Garlin Gilchrist II, executive director of the center. "Social media has become the way so many people across the world have conversations. It is as diverse as humanity—there are usages of it that are positive and there are uses that can be for more nefarious purposes.

"Our job is to create tools, and to use and make our research usable to media makers  to media consumers to platform companies, to make sure we deal with this ongoing threat of more difficult-to-understand and potential misinformation.

Gilchrist, a Detroiter who worked in the city for a number of years, has extensive experience as a technology innovator and non-profit and political organizer. He recently served as director of innovation and emerging technology for the city of Detroit. He is a U-M graduate with degrees in computer science and computer engineering.

Developing a center that addresses the growing phenomenon of social media was one of Thomas Finholt's top goals when he took the reins as dean of the U-M School of Information in 2016.

At the time, social media was coming into its own as a much-consulted information source, yet was proving increasingly unreliable in much of what was purported to be news. Unlike print and broadcast journalism, there are no gatekeepers or regulators to make sure the information on the internet or social media is credible.

Yet, the latest Pew Research Center poll shows 67 percent of Americans get at least some of their news from social sources, with 78 percent of those under 50 and 55 percent over 50 saying they are more likely to get news from these sites.

"From the earliest days of the internet, technologists envisioned the benefits of broader access to the means of public communication: social mobility, resistance to despotism, universal authorship and open source software," Finholt said. "Much of this has come to pass. However, we now also see the challenges arising from such unedited and unhampered access: harassment and bullying, a credibility vacuum, a race to the bottom in competing for attention and a triumph of mobilization over persuasion that threatens to fracture our society.

"We at the School of Information are committed to meeting the intellectual and social challenges of this new era of unregulated public communication via social media. Our new Center for Social Media Responsibility will help to produce the designs, systems and metrics that will steer social media use toward more civil and beneficial discourse."

Specifically, the center will feature working groups that will monitor progress, articulate principles and create metrics and tools that empower technologists to find ways to influence responsibility on the part of those who own social media organizations, and increase social media user savvy.

"For example, if our social networks are designed such that sensationalist and false information is significantly more likely to spread, then that can hurts our democracy—and even our health."

The School of Information has launched this project with an investment of its own resources and significant funding support from the Office of the Provost.

Ovadya and Gilchrist will present a session titled "Infocalypse: The Future of Misinformation and How We Stop It" at 2 p.m. CDT (3 p.m. EDT) March 13 at the South by Southwest (SXSW) Conference, Interactive track, in Austin, Texas.

Watch this video and hear Gilchrist speak about the Center for Social Media Responsibility and its mission.