Daniel E. Atkins is Emeritus W.K. Kellogg Professor of Information and Professor of Electrical Engineering and Computer Science  at the University of Michigan (UM), Ann Arbor. The first phase of his career focused on computer architecture including high-speed arithmetic methods now widely used in modern computers, as well as the design and construction of application-specific experimental machines. The second phase of his career focused on pioneering interdisciplinary research on cyber-enabled distributed knowledge communities including collaboratories and digital libraries applied to both scientific research and education. He has served as Dean of Engineering, Founding Dean of the School of Information, and Associate VP for Research at UM, as well as the inaugural director of the Office of Cyberinfrastructure at the National Science Foundation (NSF). He chaired the Blue Ribbon Panel on Research Cyberinfrastructure for the NSF that became an international roadmap for initiatives on cyber-enabled research in the digital age.  He has chaired or served on many advisory board for government, academia, philanthropy, and industry. Professor Atkins is a member of the National Academy of Engineering. 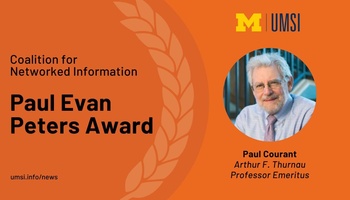 Emeritus professor Paul Courant was awarded the Paul Evan Peters Award from the Coalition for Networked Information, the Association of Research Libraries and EDUCAUSE. 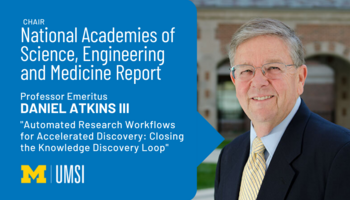 Daniel Atkins chaired a National Academies of Sciences, Engineering, and Medicine (NASEM) study committee that released a report on the promise of automated research workflow technologies. The approach could accelerate the speed of scientific discoveries and provide transparency to the research process.