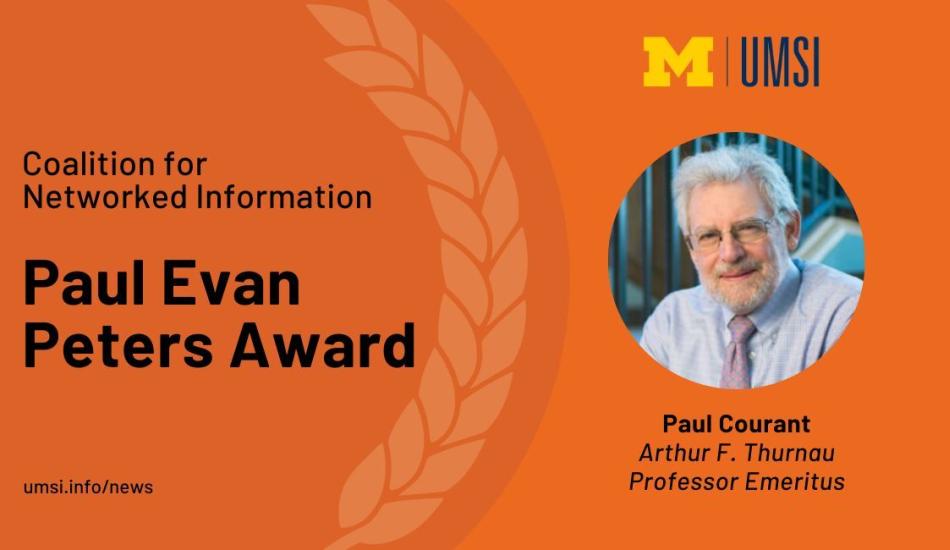 The Coalition for Networked Information (CNI), the Association of Research Libraries (ARL), and EDUCAUSE are pleased to announce that economist Paul Courant, who has served in multiple roles at the University of Michigan, including provost, professor of information and dean of libraries, has been named the 2022 recipient of the Paul Evan Peters Award. The award recognizes notable, lasting achievements in the creation and innovative use of network-based information resources and services that advance scholarship and intellectual productivity.

“It’s wonderful to see Paul Courant recognized with the Paul Evan Peters Award,” commented CNI Executive Director Clifford Lynch. “Paul’s central role in making the Google Books project possible has permanently changed the way the world views the possibilities of digital libraries and access to our print cultural heritage. It’s a study in both vision and courage, and exactly the kind of leadership Paul Evan Peters treasured and sought to foster. Courant’s initiative led us to HathiTrust and positioned research libraries to respond more effectively to the challenges during the pandemic. Our understanding of the importance of his achievement only grows in retrospect.”

Courant is the Edward M. Gramlich Distinguished University Professor Emeritus of Economics and Public Policy and the Harold T. Shapiro Collegiate Professor Emeritus of Public Policy in the Gerald R. Ford School of Public Policy. He is also a professor emeritus of economics and of information, and he holds the distinction of Arthur F. Thurnau Professor Emeritus and Provost Emeritus. He has been instrumental in reshaping scholarly communication throughout his illustrious and varied career. Mary Lee Kennedy, ARL executive director, stated that “Paul Courant epitomizes the qualities of the Paul Evan Peters Award recipient—a person with the vision and willingness to take major risks with higher education leadership. Courant’s foresight in leading the Google Books initiative and establishing HathiTrust, and as part of the leadership that launched the Digital Public Library of America, profoundly changed the nature of research, and continues to benefit researchers worldwide.”

While provost and executive vice president for academic affairs at the University of Michigan, Courant negotiated with Google to allow digitization of the entire library contents for Google Books, provided that the university retain copies of the digitized files and retain the right to develop consortial arrangements with other academic libraries and related institutions. These requirements proved foundational to HathiTrust, which Courant spearheaded while dean of libraries. Today, HathiTrust has preserved 17+ million digitized items and fundamentally changed the economics and accessibility of digital collections. When physical collections closed during the COVID-19 pandemic, HathiTrust implemented the Emergency Temporary Access Service and permitted member libraries special access to its digital materials.

“This year’s award provides a perfect opportunity to recognize the leadership and vision Paul Courant has provided for a shared digital library ecosystem. Thanks to his prescience, libraries everywhere realized the benefits of ‘at-scale’ solutions through HathiTrust, which largely made academic continuity possible in the wake of the pandemic lockdown. As we move forward to further leverage networked information and services, it is fitting to recognize Paul’s lasting contributions to this cause,” said Lorraine J. Haricombe, selection committee member and vice provost and director of libraries at The University of Texas at Austin.

EDUCAUSE president and CEO John O’Brien noted that, “The last few years have been marked by more uncertainty than anyone can remember—and there is no better time to pause and recognize remarkable leaders like Paul Courant, whose contributions have made an even bigger difference during challenging times like these.”

The award will be presented during the CNI Fall 2022 Membership Meeting in Washington, DC, December 12–13 where Courant will deliver the Paul Evan Peters Memorial Lecture. The talk will be recorded and released on CNI’s YouTube and Vimeo channels.

CNI, the Association of Research Libraries, and EDUCAUSE sponsor the Paul Evan Peters Award, which was established with additional funding from Microsoft and Xerox Corporations. The award honors the memory of Paul Evan Peters (1947–1996), a visionary and coalition builder in higher education and the world of scholarly communication. He led CNI from its founding in 1990 with informed insight, exuberant direction, eloquence, and awareness of the needs of its varied constituencies of librarians, technologists, publishers, and others in the digital world.

For more information, visit the award website at https://www.cni.org/go/pep-award.

The Association of Research Libraries (ARL) is a nonprofit organization of research libraries in Canada and the US whose vision is to create a trusted, equitable, and inclusive research and learning ecosystem and prepare library leaders to advance this work in strategic partnership with member libraries and other organizations worldwide. ARL’s mission is to empower and advocate for research libraries and archives to shape, influence, and implement institutional, national, and international policy. ARL develops the next generation of leaders and enables strategic cooperation among partner institutions to benefit scholarship and society. ARL is on the web at ARL.org.

EDUCAUSE is a community of IT leaders and professionals working together to tackle challenges and leverage opportunities that are constantly evolving within higher education. EDUCAUSE welcomes diversity, in viewpoints and experience, and believes in the transformative power of uncommon thinking for the common good. Visit educause.edu. 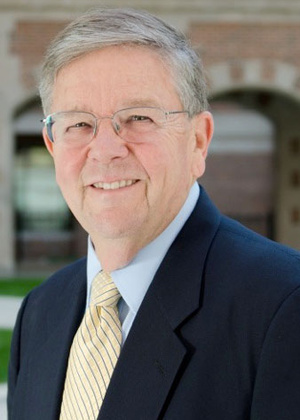