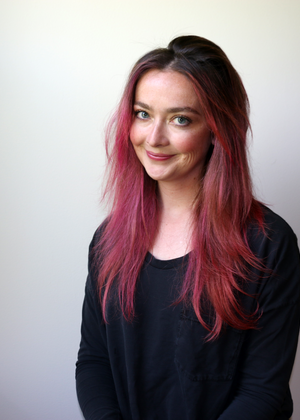 Sophia Brueckner, born in Detroit, MI, is a futurist artist/designer/engineer. Inseparable from computers since the age of two, she believes she is a cyborg.

She received her Sc.B. in Computer Science and Applied Mathematics from Brown University. As a software engineer at Google, she designed and implemented products used by tens of millions and later on experimental projects within Google Research.

Brueckner earned her MFA in Digital + Media at the Rhode Island School of Design and MS in the Fluid Interfaces group at the MIT Media Lab where she investigated the simultaneously empowering and controlling aspects of technology within computer programming, algorithms, user experience design (especially social networks) and tangible interfaces.

Since 2011, Brueckner has taught Sci-Fi Prototyping, a course combining sci-fi, extrapolative thinking, prototypes, and the ethics of invention/design at MIT, Harvard, RISD, Brown, and the University of Michigan. Both the class itself as well as the students’ individual projects received international recognition and were featured by The Atlantic, Smithsonian Magazine, Wired, NPR, Scientific American, Fast Company, and many others.

Brueckner is the founder and creative director of Tomorrownaut, a creative studio focusing on speculative futures and sci-fi-inspired prototypes.

Brueckner’s work has been featured by SIGGRAPH, Artforum, Eyeo, ISEA, the Peabody Essex Museum, Portugal’s National Museum of Contemporary Art, TEDx, the Bemis Center for Contemporary Art, and more. She is currently an assistant professor at University of Michigan's Stamps School of Art and Design and School of Information where she teaches sci-fi prototyping, digital fabrication, creative programming, design, and art + technology. Her ongoing objective is to meaningfully combine her background in design and engineering with the perspective of an artist to inspire a more positive future. 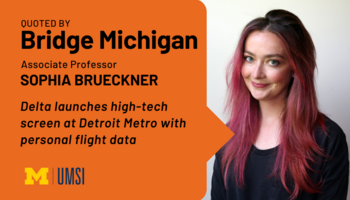 Brueckner: A new high-tech screen at Detroit airport seems harmless but consumers should be skeptical

Associate professor Sophia Brueckner says a new screen that shows 100 travelers their flight information at the same time isn’t just a neat gimmick– it has implications for data privacy. 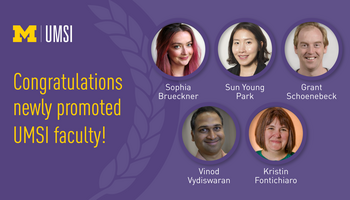 Sophia Brueckner, Sun Young Park, Grant Schoenebeck and Vinod Vydiswaran will be promoted from assistant professor to associate professor with tenure, and Kristin Fontichiaro was promoted to Clinical Professor.