For Master of Applied Data Science (MADS) student Nick Capaldini, finding community has been at the heart of his UMSI experience.

Through the remote teaching format, Nick, based in Minneapolis, Minn., has been able to form connections with classmates from 44 different countries and six continents. Bonding has been easier than he anticipated, thanks to Slack and virtual events.

“I was surprised by the sense of community within the MADS program. There are plenty of opportunities to engage in activities. I recently participated in an online data science hack-a-thon with a team of MADS students. One of my professors advised us on the project during the weekend. We ended up getting second place out of 25 teams. We found each other on the Slack channel,” he said. 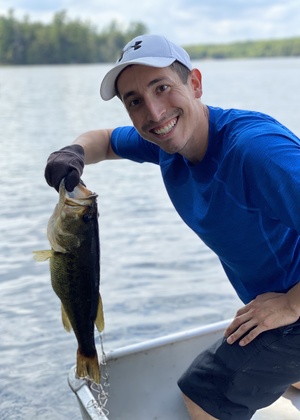 Nick previously studied product design at the University of Oregon and decided to pursue his master’s after spending time in the information industry as a contractor for the Department of Defense in Austin, Texas. He noted: “I like how data science can be used as a tool in solving so many important problems.” In order to dive deeper in his courses, he’s taking a break from work.

Wanting to sharpen his technical skills and abilities, Nick was excited to enroll in the program after encountering UMSI’s teaching on Coursera. He likes the online learning model and has taken multiple MOOCs, including “The Entrepreneurial Mindset” on edX offered through Babson College, where his aunt used to be a professor. He was also enrolled in a course called “Nand 2 Tetris” where he built all the hardware components of a computer using a simulator.

Nick is using his time in school to better understand the intersection of human performance and transportation. He’s currently enrolled in SAIDS 503: Data Science Ethics. “The reading takes extra time for me due to my dyslexia, but I find the topics fascinating and important for us to be discussing,” he said.

When he’s not working with data, Nick can be found near water at his family’s cabin in northern Wisconsin. He’s a passionate fisherman looking to catch his first muskie.