We study the consumption response to typical labor income shocks and investigate how these vary by wealth and race. First, we estimate the elasticity of consumption with respect to income using an instrument based on firm-wide changes in monthly pay. While much of the consumption-smoothing literature uses variation in unusual windfall income, this instrument captures the temporary income variation that households typically experience. In addition, because it can be constructed for every worker in every month, it allows for more precision than most previous estimates. We implement this approach in administrative bank account data and find an average elasticity of 0.23, with a standard error of 0.01. This increased precision also allows us to address an open question about the extent of heterogeneity by wealth in the elasticity. We find a much lower consumption response for high-liquidity households, which may help discipline structural consumption models.

Second, we use this instrument to study how wealth shapes racial inequality. An extensive body of work documents a substantial racial and ethnic wealth gap. However, less is known about how this gap translates into differences in welfare on a month-to-month basis. We combine our instrument for typical income volatility with a new dataset linking bank account data with race and Hispanicity. We find that black (Hispanic) households cut their consumption 50 (20) percent more than white households when faced with a similarly-sized income shock. Nearly all of this differential pass-through of income to consumption is explained in a statistical sense by differences in liquid wealth. Combining our empirical estimates with a model, we show that temporary income volatility has a substantial welfare cost for all groups. Because of racial disparities in consumption smoothing, the cost is at least 50 percent higher for black households and 20 percent higher for Hispanic households than it is for white households. 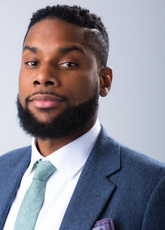 Damon Jones is an associate professor at the University of Chicago Harris School of Public Policy. He conducts research at the intersection of three fields within economics: public finance, household finance and behavioral economics. His current research topics include income tax policy, social security, retirement and retirement savings, and the interaction between employer-provided benefits and labor market outcomes.

At Harris, Damon Jones currently teaches a course on public finance and public policy, a course in advanced microeconomics, and the practicum "Taxes, Transfers, and Nonprofits." He was a post doctoral fellow at the Stanford Institute for Economic Policy Research (2009–2010) and is a Faculty Research Fellow at the National Bureau of Economic Research. Jones received his PhD in Economics from the University of California, Berkeley, and also holds a BA in Public Policy with a minor in African and African-American Studies from Stanford University, which he received in 2003.