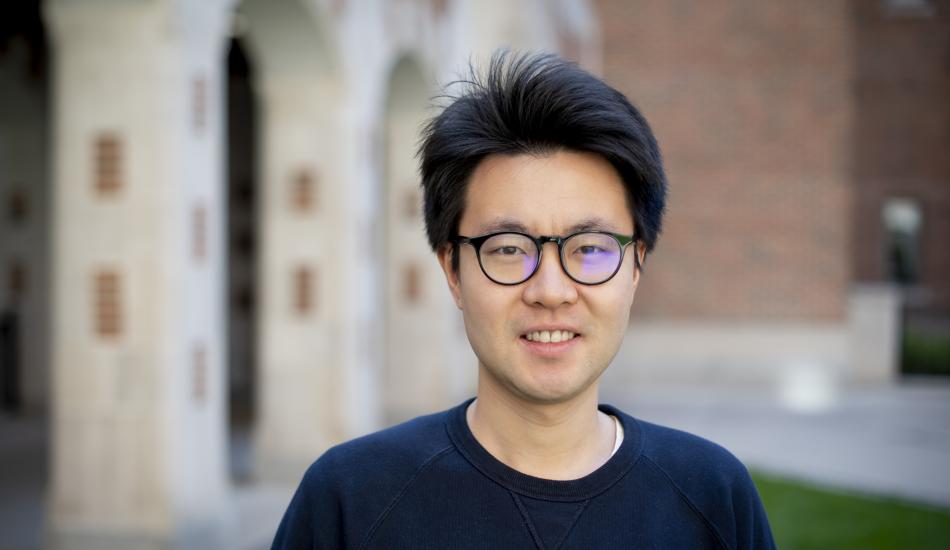 Humans are messy. While humans are being messy, they’re creating data. This data is also, now, messy. Which is why fourth year PhD student Jiaqi Ma finds the patterns that make it all make sense.

Jiaqi grew up in Beijing, China and discovered his passion for science at an early age. In high school, physics interested him, but Jiaqi decided to major in Engineering as an undergraduate at Tsinghua University. He thought it would be more practical.

As an undergraduate, Jiaqi experienced his first exposure to research. He discovered that he wanted to continue research after graduation through his work at KEG lab at Tsinghua University, where he did data mining on social networks.

Jiaqi also interned for Megvii, a computer vision startup in Beijing. There, he studied how to improve human re-identification from videos.

“I enjoy thinking and summarizing,” Jiaqi said “That’s part of the reason why I wanted to do a PhD. I wanted to have some time focused on learning how to think and  how to extract succinct patterns from the world.”

Jiaqi’s advisor at Tsinghua University, recognizing Jiaqi’s passion, introduced him to Qiaozhu Mei, an Associate Professor of Information at UMSI. Jiaqi decided to come to UMSI after familiarizing himself with Qiaozhu’s research. He also was attracted to the multidisciplinary approach of the School.

Jiaqi believes that studying at The School of Information helps him solve a common research problem. “I think actually one of the hardest parts of research is finding good research motivations,” Jiaqi said.  “At UMSI there are people from different backgrounds providing different lenses to inspect the same problem and I think that’s what helps us think outside the box.”

Jiaqi’s research group, the Foreseer group, is a microcosm of UMSI to Jiaqi. “People have diverse research interests— it’s kind of like a smaller UMSI,” he said.

At UMSI Jiaqi concentrates on developing machine learning models for unstructured data, especially graph and text data. Data has become more and more important. "Many big companies nowadays make most decisions based on data, whether they are using machine learning or not," Jiaqi said.

Many traditional machine learning models are designed for well-organized tabular data. Jiaqi wants to make machine learning more directly applicable to massive but messy and complex unstructured data. Which is why he is developing graph representation learning methods.

Developments in data science have made Jiaqi hopeful about the future of discovery.  “Previously when people developed something in traditional chemistry or physics they usually first develop some hypothesis and then design an experiment and collect data,” Jiaqi said. “But now we have tons of observational data that exists before we really develop a hypothesis. It’s kind of like speeding up our way to discover new knowledge.”

Since coming to Michigan, Jiaqi has had three research internships for Google Inc. At Google, Jiaqi conducted research very similar to the research he conducts as a PhD candidate at UMSI.

When he has the time, Jiaqi likes to play Shengji, a popular Chiense card game, with friends.

Jiaqi isn’t getting tired of research any time soon. After graduation he wants to continue his work wherever he can.