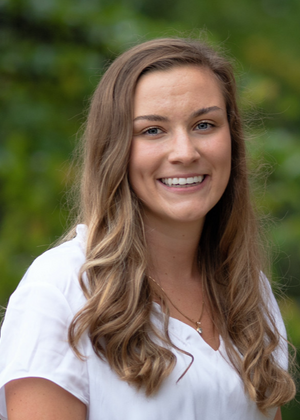 Second-year MHI student Emmi Carr doesn’t shy away from a challenge. With uncommon drive, Emmi has leveraged her place at UMSI to seize the school’s cutting edge courses and extraordinary professional internships, including one that led to a full time job offer in her field.

When Emmi first came to UMSI she said she had only taken the “bare minimum” of programming courses. That didn’t deter the intrepid master’s student, who had just earned her BS from the University of Michigan School of Public Health, from going for the more challenging classes that captured her interest.

“I remember talking to the advisor and she was saying how very few UMSI students take this one course,” Emmi said. “I said, ‘Well, is it a problem? Am I allowed to?’ … I was not really nervous as I was very interested in the material. I knew I could push through and learn it, so I didn’t shy away from that.”

Emmi said she gravitated toward taking more advanced programming courses right off the bat because the potential of the field was so fascinating.

“Those classes were all just awesome to see really what you can do,” she said. “That's why I like those courses, I like problem solving and critical thinking.”

And Emmi said that while she was determined to explore what her MHI degree could do, UMSI staff and faculty were there to support her “every step of the way, especially the first semester.”

“When I was applying to grad schools, first I knew I wanted to stay at Michigan because I just love it here. I love the professors. I love the community, so I knew there was no way I was leaving,” Emmi said.

Emmi, who grew up in the suburbs of Chicago in Glenview, IL, originally came to Michigan for her undergrad with pre-med in mind but said she shifted gears quickly.

“At that time, I made the decision to apply to the School of Public Health … but I had a lot of friends who were in Information and were taking those types of courses,” Emmi said. “It got me really interested in the material. That's how I started taking classes like SI 106, which is Intro to Programming.”

So when it came time to apply to grad schools, UMSI was one of the natural choices. When pitted against Emmi’s other choice, bioinformatics, Emmi said she went with the MHI because she could really envision where the program would take her.

One of those places was South Africa, virtually, through an exciting internship Emmi participated in during the summer of 2020.

“I originally was supposed to be working for Stryker, which is a medical technology company, and they had to cancel all their summer interns,” Emmi said. “I started looking [for other options] that day and I found the Africa Centre for Dispute Settlement through UMSI iTrack.”

Emmi credits the UMSI Career Development Office with being on top of “posting tons of research jobs and connecting people” during COVID and helping her find an outstanding virtual opportunity in the nick of time.

“That was my first real experience doing work virtually, which definitely came with its challenges,” Emmi said, “but I think it was a great opportunity. The people in South Africa we were working with were … so excited about everything, so I think that really helped push things forward.”

Additionally, Emmi was “one of the few” UMSI students to participate in a yearlong Multidisciplinary Design Program with Stryker, building a system that identifies burs used in neurosurgery.

“That was a really cool experience overall because one, it was in health care, which is perfect for me,” said Emmi, “and two, I got experience working with engineers, which is something I could see myself doing going forward. I think it's really good to know how to communicate across lines there and how to blend your roles to a certain extent.”

Throughout her MHI career, Emmi has chased down every chance to put her knowledge to the test outside of the classroom.

“One thing that I can really take away from this program is I really learned how to apply the skills,” Emmi said.

Her supervisors at her current internship at ArborMetrix this semester agreed. Emmi is approaching graduation this spring with a full-time job with the company in her pocket.

“We're a registry solution, so we help people bring together and analyze their data,” Emmi said. “That's the great thing about this program⁠ — I know you can graduate during this time⁠. It's not ideal, but there are jobs out there for us. People need this probably more than ever."