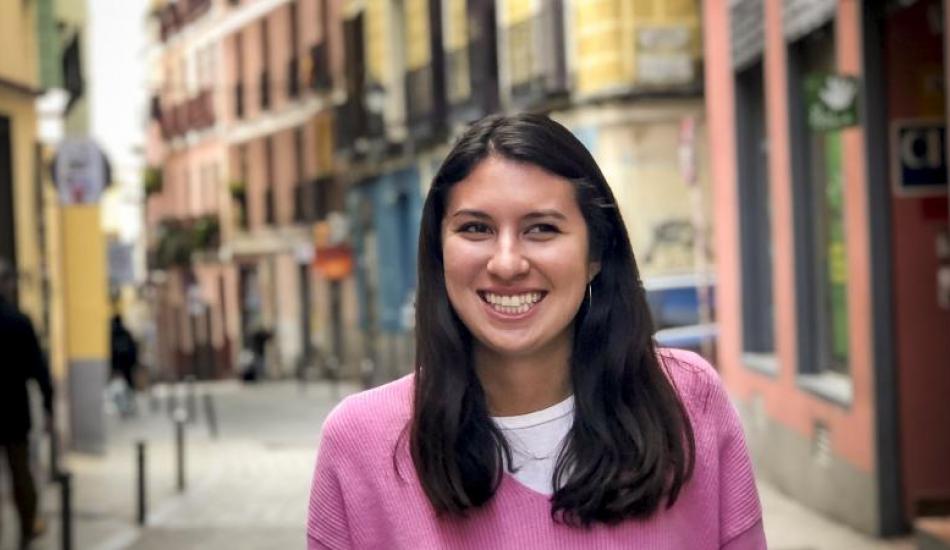 Emma Shpiz is traveling the world, amplifying student voices and advocating for equity in sports.

Since choosing to pursue UX at UMSI, Emma Shpiz’s go-with-the-flow attitude and passion for beneficial and responsible use of technology have taken her a lot of places; Taiwan, school gymnasiums, rehabilitation centers, and now, Madrid.

Emma toyed with the idea of majoring in Computer Science, but realized she preferred work that was more collaborative than coding, which she found to be more solitary.

Since 2017, Emma has worked with Professors Sun Young Park and Roland Graf on a project, iGym, which uses augmented reality to enable able bodied children to physically play with children who use wheelchairs. The team designed a floor projection system that projects a ball on the gym floor, as well as circles around the players. The players use the circles that encompass them like air hockey strikers to try to get the ball into the goal on the other team’s side.

Emma has been interested in making sports accessible since high school when she volunteered for a program that offers children with special needs the time, space, and attention required to play sports. When she discussed her experiences with Sun Young Park, they realized she would be a great addition to the iGym team

Emma conducted UX research to ensure that iGym would benefit its users. She realized the full extent of how beneficial the project was when she interviewed a mother of a child who uses a wheelchair. Seeing her child play competitively against someone who was standing up moved the mother to tears. “People love it so far,” Emma said.

Though iGym Emma discovered the field of UX and the School of Information. “I realized how great [UMSI] professors are,” Emma said. She applied to UMSI and now is a junior BSI student.

The summer before her first year as a BSI student, Emma worked as an intern for a startup called Jobalaya in Taiwan. Emma is a Chinese language minor and was excited to have an opportunity to practice her skills, though she worked for an American company. Jobalaya is a recruitment platform that matches job seekers with small tech companies. Emma fulfilled a variety of responsibilities at the small startup such as data analytics on marketing campaigns and researching funding opportunities.

Emma serves as the Vice President of the School of Information Bachelor’s Association. “I think that there’s a lot of voices to be heard and I’m glad to be able to be the intermediary between the professors, the dean, and the average students,” Emma said. “I love hearing conversations that start in the hall and being able to bring them to the board.”

Emma, a lifelong traveler, has wanted to study abroad for some time. It was just a matter of deciding where to go. Since she had recently explored Taiwan, she decided to study in Europe. Emma has also visited London, Amsterdam, Ireland, and Switzerland since the semester began.

Emma is a UMSI bilateral exchange student at IE University along with eight other students currently in Madrid. In the fall of 2019, some of Emma’s Spanish classmates will join her at UMSI. “It’s an international school so the students and teachers are from all over the world," Emma said. “It’s been a really cool experience.”

When Emma was searching for a summer internship, she used the skills she learned in SI 300 to reach out to Michigan alumni at companies she wanted to work for. “They were super helpful and love hiring Michigan grads,” Emma said. In the summer of 2019 Emma will work as a Research Intern for IBM.