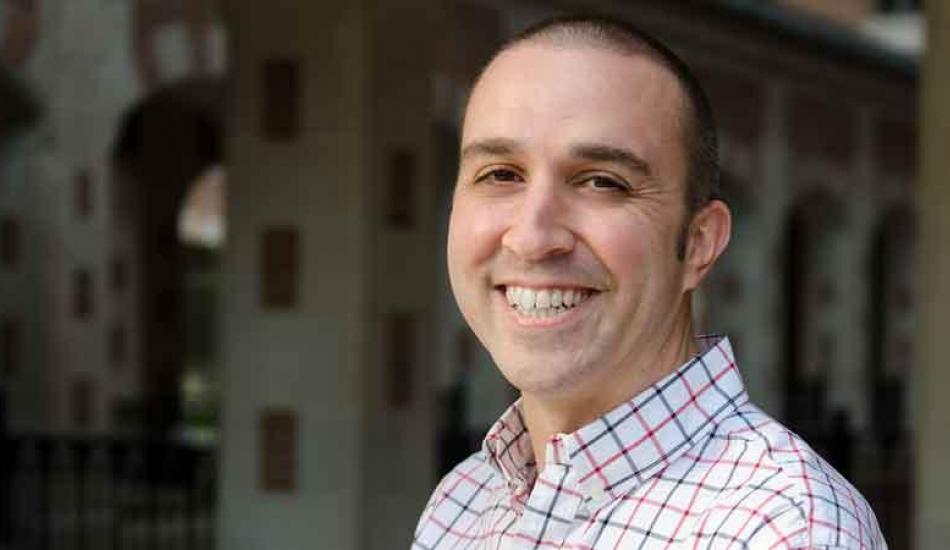 MSI graduate Derek Van Assche had the desire to go back to school for his graduate degree but two things were stopping him – time and money.

The University of Michigan helped Derek overcome both of those problems by providing an opportunity to obtain his MSI on a part-time basis while the married father of two worked full-time. Since he worked at U-M, a portion of his tuition was reimbursed, and because he was a senior software developer at Inter-University Consortium for Political and Social Research (ICPSR), his remaining tuition was reimbursed by ICPSR.

Derek graduated in May with an MSI specializing in Information Economics for Management (IEM). “I’m interested in data services and statistics,” he said. “I’m back in touch with a design way of thinking.”

UMSI offered Derek the balance he was seeking in the IEM field. “There is both an art and a science to good design,” Derek said. “While it is a difficult concept to encapsulate, I appreciate the perspectives from different academic disciplines offered by IEM and MSI in general.”

Derek has a strong background in IT, working at Border’s Group Inc. in Ann Arbor for eight years before the company filed bankruptcy. In 2006, he took a Senior Java Developer position with Sungard Energy Systems, which focused on energy market data analysis software. But when Sungard halted hiring in Ann Arbor and offered to move employees to Houston in 2010, Derek decided to move on again.

That’s when he came to ICPSR where his duties included creating new tools for website redesign and creating web apps to streamline workflow between ICPSR and National Family Growth studies so website updates can be made seamlessly on the publicly-viewed website. He also managed non-public-use data requests from Measures of Effective Teaching Longitudinal Database studies. His work ultimately benefits university researchers.

That same year, Derek began his graduate education. “I want to better understand the various human factors involved in the design process and the MSI degree offers several courses that meet this end,” Derek said. “Technology alone cannot solve the world’s problems. You can have the greatest, most sophisticated, and well-implemented technology in the world, but if it does not address real problems from real people who use it, then people will not use it and it is a failure.”

Derek, who also has a BA in Computer Information Systems from Eastern Michigan University, said there are multiple ways he can use the skills his MSI has provided him. His career plans include a possible data science role, management of software development, or working as a technical architect.