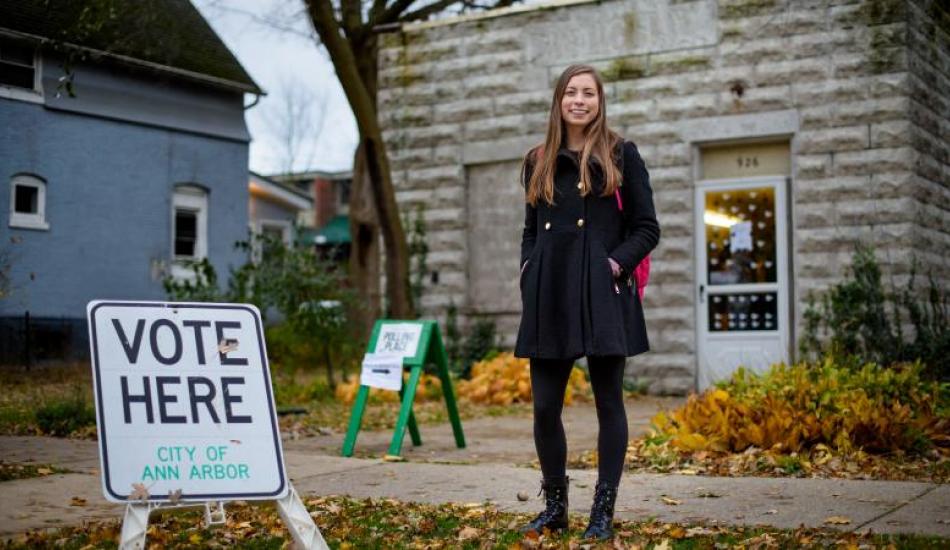 Shaelyn Albrecht is using information and UX design to ensure every voter's voice is heard.

On Tuesday November 8, 2016 in Ann Arbor, voting lines were long. It is unclear how long, as the poll workers were too busy trying to shorten the lines to record accurate data, but hours long. Long lines risk preventing voters on tight schedules from making it to the voting booth. Shaelyn Albrecht, a Citizen Interaction Design junior fellow and BSI student, worked with the Ann Arbor City Clerk, Jacqueline Beaudry, to solve this problem in time for the 2018 midterm election.

Shaelyn was a rising junior in the summer of 2018, the summer she worked with MSI student Ethan Grier and the City Clerk's office to improve the experience of voting in Ann Arbor. She had been accepted to UMSI as a cross-campus transfer and was ready to get started in the field of user experience even before she took her first classes as a BSI student.

Shaelyn grew up in Hartland, Michigan, a forty-five minute drive north from Ann Arbor. Her father went to the University of Michigan and she always knew she would at least apply to U-M. She ultimately came to UMSI to take advantage of the opportunities to work in the real world as a student, like those offered by the Citizen Interaction Design summer fellowship.

Shaelyn learned about Citizen Interaction Design, a program that connects cities with information problems with students who can help solve them, during her UMSI orientation process. She reached out to program director Scott TenBrink to see if she could be a part of it. Historically, the Citizen Interaction Design summer fellowship has been awarded to a graduate student. TenBrink made an exception for Shaelyn. “They were excited that I was interested,” Shaelyn said. “They had never had an undergrad be interested in the program before.”

The Citizen Interaction Design summer fellowship provided Shaelyn with the opportunity to do UX design, a topic she learned about in her Introduction to Information Studies course.  “User Experience doesn’t necessarily mean just technology. There is the experience of waiting in a line; it’s not technical in itself, but it’s an experience,” Shaelyn said.

Shaelyn has also always been a performer. She holds two national titles as a baton twirler and now performs with the Michigan Marching Band.

Shaelyn’s performance mindset compelled her to combine her passions and focus on UX design. “You have to think about how you are going to present something to whoever is watching you,” she said.

The City Clerk’s Office tested the website during the primaries in August 2018 and utilized it in all voting locations in Ann Arbor for the midterm election in November. Volunteers, rather than poll workers, used the website to record data. UMSI students, faculty and staff could sign up to monitor and report line lengths for UMSI Service week. “It was great to have a resource like UMSI, because they got a lot of responses,” Shaelyn said. Because of the line-monitoring website, the clerk’s office was able to alter the allocation of resources in response to line lengths and keep lines short.

This past fall semester Shaelyn worked for the U-M Office of Academic Innovation on current websites and apps. “I liked that it was tied to education,” she said.

Though Shaelyn’s recent work experience has been in the public sector, she is curious about both public and private sector positions in the future. “Right now I’m still pretty open,” she said. She is open in terms of the variety of jobs she’d be interested in, and is open to reaching out. “If I hadn’t just reached out for the Citizen Interaction Design, that wouldn’t have happened," she said. "I want to stay open to things that I might not totally know about yet." Whatever she does, she hopes to do it in Ann Arbor.