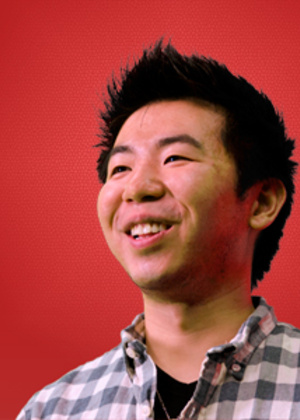 Yi Zhou and his teammates built the application Sgraffi, which won first place at the 2012 expoSItion. The name comes from sgraffito, a painting technique in which a coat of paint is covered by a second layer in a different color, which is then scratched away with a palette knife or oil stick to reveal a design in the color below. Is there a child anywhere who hasn’t played with that technique, using colored and black crayons instead of paint?

Sgraffi captures that playfulness in an app that turns an iPhone into a tiny canvas with the user’s finger as a brush to draw pictures. Yi’s enthusiastic demonstration of his invention doubtless contributed to the attendees at the annual UMSI student showcase voting it the best project of the exposition. It’s available to download on iTunes.

Sgraffi isn’t Yi’s first experience developing applications. As an undergraduate at Michigan in electrical engineering and computer science, he started his own business with a software app that helped students sell their used textbooks. He comes by his entrepreneurship naturally, as both his parents are entrepreneurs. His mother owns a travel agency and his father coordinates shipping between US and China. Yi was born in China and came to the U.S. at the age of six. He grew up in Chapel Hill and Raleigh, North Carolina.

Constantly on the move, Yi swims, plays soccer, and has competed in track and field. But his avocation is ballroom dancing. At Michigan, he was a member of the U-M Ballroom Dance Team and competed in national contests.