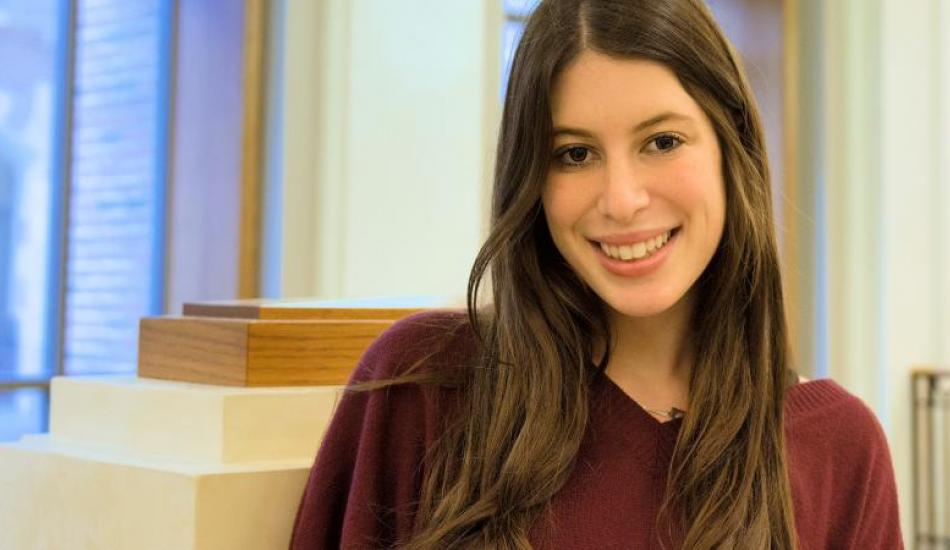 It was October of her sophomore year, when Samantha Herman started receiving tweets from people she had never met before. Messages such as “you are famous in London today!” and “400 people think you are awesome” poured into her inbox, and she remembers thinking, “What is going on?”

It traces back to her freshman year, she explains, when SEER Interactive hired her as their first official intern. An online marketing consulting firm, SEER was intrigued by Samantha’s background in social computing informatics.

At the time, Samantha was part of the LSA Informatics program. She was on the social computing track, which was predominantly housed within the School of Information. She recalls that her background had piqued the interest of recruiters at SEER, who had never heard of an iSchool before.

“When I first spoke with them,” Samantha says, “I had to explain the concept of the School of Information. They were very interested in what that was, and I feel like it signaled the beginning of a great relationship.”

She was initially brought on board to help with anything from search-engine optimization to back-link analysis, keyword search and organic search - basically anything that required additional assistance.

Eventually, her boss gave her a project to work on, mainly to see where she could take it.

“It was really just an idea,” she says. “He wanted to assess the impact of paid online advertisements, such as paid tweets, Facebook posts, and the ‘you may also like’ sections at the bottom of articles.”

With the task at hand, Samantha began gathering content for the testing phase and was consequently given an unconventional budget to work with.

“My boss ended up giving me a $10,000 budget just to play with because he saw a lot of value in what I did,” she confesses. “I played with a lot of different things – some were failures, but I also had a lot of successes.”

After submitting the results of her project and returning to school in the fall, Samantha didn’t really understand the impact of her work until months later.

“I saw that my boss presented at the SearchLove conference in London, which is an online marketing conference,” Samantha explains, “And his presentation was based on my entire research project. Suddenly, people were tweeting at me, and at the time I had no idea what was happening!”

She adds, “For him to present my work at the conference definitely showed me it was a big accomplishment. It ended up being a new service that they offer to clients, called ‘Content Acceleration.’”

Her time at SEER, Samantha explains, was a pivotal moment which helped define her academic and professional goals. She now specializes in UX research as a senior in the BSI program, with a special interest in social computing informatics and a minor in stats.

“I’ve always been really interested in the different interactions that people have on the computer,” she shares. “It involves change in the future, and I knew it was something that I would be good at. It also combined a lot of stats, and I wanted to find a creative way to incorporate statistics.”

Her most recent undertaking is an independent research project, with Lampe as her advisor, which looks at how Venmo was adopted throughout campus.

“The diffusion of innovation was our driving theory,” Samantha explains. “When someone has a positive evaluation of something, it causes them to want to keep spreading it and using it. This signaled that there was clearly a positive aspect of Venmo that made people want to use it.”

Through a series of student interviews, Samantha found that the mobile app alleviated a large financial concern for students on campus.

“Venmo pinpoints a core need, which was the burden of paying different friends and having to carry cash around,” she explains. “Venmo is a mechanism for making this a more seamless process, and by understanding that, we can impact our understanding in the future of how something becomes so easily adopted.”

From the way that Samantha talks about her projects, it’s quite evident that her mind is constantly churning with new research possibilities.

“I just think of ideas all the time and write them down on my phone…” she laughs.

This semester, Samantha works as a stats tutor, helping six of her students prepare for the STATS 250 exam. “I love interacting with the students,” she says. “And tutoring always helps me remember the basic fundamentals of stats.”

Following graduation in April 2016, Samantha will be joining Deloitte Digital as a consultant working within their technology sector. She recently completed an internship with the company as their Business Technology Analyst, Summer Scholar, where she helped a global automotive company design an entire data analytics system for interpreting marketing data.

She advises that for undergrads who are interested in UX research or design to start building their portfolios early.

“Try to get involved in research projects early on,” Samantha explains. “Having a big research portfolio will be extremely helpful when applying to these kind of jobs.”