Ashley Hampton’s motivation to be a UX designer is simple. She’s in it for the people.

The 25-year-old Master of Science in Information (MSI) student is an empath who gets fulfillment from work that connects her to individuals and their stories. For her, one of the most rewarding parts of the program has been the mentorship she’s able to provide for fellow students and organizations outside of the school.

This winter she used the extended academic break to donate her UX skills to two nonprofits: Comida for Familias, an organization utilizing technology to address food insecurity and for Think Round, a nonprofit that combines art and culture with environmental action.

“I got into UX because I just want to help people, that's the bottom line. I want to take this education, these resources I’m given and give back in some way, pay it forward,” she said.

The Washington State native earned her bachelor’s degree in accounting with a minor in Asian studies from Seattle University in 2017. After graduation she landed an automation consultant position at a Chicago accounting firm and then moved to business design at a marketing technology startup.

In her role as a business designer, Ashley began thinking about her next move. She wanted to transition from building process flows and working with a purely organizational scope into a design role that focuses more on consumer product creation and designer and development partnerships. Her search led her to UMSI 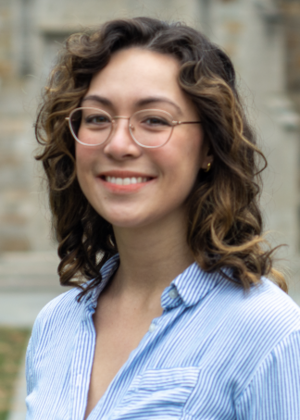 Currently in her second year of the MSI program. Ashley specializes in UX design and research. Her area of interest is social good.

As a student, Ashley has been part of multiple volunteer projects including the 2020 Civic User Testing Group (CUT) conducting usability testing for the City of Ann Arbor’s boat livery webpage. The goal of the research was to evaluate the webpage’s information architecture, navigation and overall usability.

She also worked as a project manager and UX researcher with the Learning Education and Technology group at the School of Information (LETSI). In the role she led a group of undergraduate and graduate students in usability testing and consulting for a SciStarter, an education technology nonprofit.

Ashley said that being given “full reins was super intimidating as a first-year student, especially as someone who’s new to the UX field.” Yet that same agency led to one of her most important discoveries, that “learning how to listen to people in UX and doing a lot less talking” is critical to producing meaningful work.

Last spring, Ashley got involved with the Michigan Safe Start Map, a COVID-19 risk tracking dashboard. Ashley was excited by “how much impact the tool made, especially when it came to educating the public about misconceptions and providing realistic data and making it accessible.”

Her experiences with CUTgroup, LETSI and MI Safe Start Map motivated her to take Citizen Interaction Design taught by Scott TenBrink. In collaboration with the Department of State, Ashley collaborated with a team of UMSI students to increase voter turnout among underrepresented populations by creating a social media kit, focusing specifically on returning citizens.

During the academic year Ashley works as a graduate student instructor for UMSI, but this summer she interned as a UX designer for GE Aviation’s Detroit office. The work was fully remote, but the team did a great job of helping her feel connected and welcomed.

Outside of her busy UMSI classes and groups, Ashley is usually behind a camera, drawing or cooking. As for drink pairings with the food she creates, Ashley has it covered. She holds a level 2 certification from the Wine & Spirit Education Trust and has enjoyed organizing Zoom wine tasting events for her friends and her roommates. She lives with three of her classmates and her dog Cooper in Ann Arbor.

Ashley’s favorite part of UMSI has been the lasting relationships she’s made within her cohort. She’s also grateful for the breadth of experience her peers bring to the program. Like Ashley, many MSI students come from outside fields which she said, “is super valuable and really comforting.”

She continued, “I think that the diversity really helps bring important perspectives.”