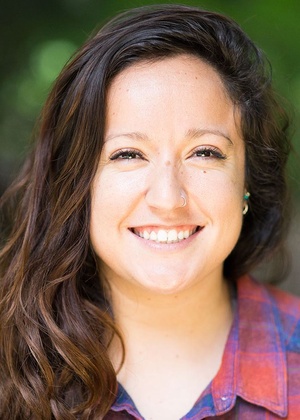 Madel Leal is a self-described social justice engineer working at home and abroad to support the human center of the information field.

“I come from a social work background,” said Madel. “I think a lot of what drives my work, my passions, has to do with people ⁠— of all ages, but recently with older adults more than anything.” A child of the tech boom, Madel works to maintain traditions of social connection in physical spaces. “I’m a people person. I’m very drawn to connecting to folks … I don’t want to lose that physical social connection now that you can connect with people across the world online. That’s really cool … but I feel like a lot of older generations still treasure conversation and hold onto that. I’m always drawn to organizations and work with people from older generations.”

Madel grew her people-first approach getting her bachelor's degree in sociology at the University of California, Los Angeles. Her first exposure to tech, she said, came with her post-grad work with UCLA’s Graduate School of Education and Information Studies (GSEIS). For a project called MOBILIZE, Madel programmed nearly 100 Android phones given to underserved students in LA learning about computer science. “That was my very premature exposure to tech,” she said. “I thought it was fascinating, really cool.”

After a three-year stint working in LA’s nonprofit realm, Madel decided to go back to school for a master’s degree in social work. “I want to come from a learning place. I want to come from a social justice lens … I already loved sociology. It just made sense that I specialize more on this human piece, this people perspective.”

As a native Californian, Madel chose to brave Michigan’s colder climes and enroll in U-M’s renowned School of Social Work. “I actually discovered the School of Information when I was working at the School of Social Work’s Office of Global Activities,” she said. A coworker working toward a dual master’s in education and information sparked Madel’s interest in bringing tech resources to communities. Attending a talk for prospective UMSI students sealed the deal, she said. “The program was really focused on keeping the human center … Once I heard that, I was like, there’s no question about whether or not this makes sense to me, whether or not this program would provide growth and a new level of understanding.”

After finishing her MSW requirements with fieldwork in Peru during the summer of 2017, Madel began the MSI program the following fall semester. Seeking hands-on research experience from the get-go, Madel joined Dr. Casey Pierce’s project examining how older adults interact with telehealth services. As a research assistant, she was inspired by the potential for innovation in areas of the information field that are still developing.

One of the highlights of her MSI career, said Madel, was her fieldwork in Cape Town, South Africa with U-M’s Global Information Engagement Program (GIEP) in the summer of 2018. With a small interdisciplinary team, Madel worked onsite with community partners to create a virtual map memorializing District Six, an area of Cape Town wiped out during Apartheid. “Apartheid didn’t happen that long ago,” she said. “There are community members that are still trying to preserve their childhood and their memories … There’s proof that they actually lived here.”

Advancing her global experience, Madel traveled to Ecuador the following summer with community development organization Nido de Vida. “I was looking at how we can use information as a tool for community engagement, bringing together this community in rural Ecuador where there’s no technology, barely any signal,” she said. Through interviews, her team put together a video documenting the area’s history and culture. “It was participatory … they told their stories in a way that could be shared more broadly, with students, the broader Ecuador, municipalities and local governments.”

Though her global work has been extensive, Madel has made strides for communities at home as well. As an information mentor, she serves as prospective UMSI students’ tangible contact. She said that her favorite part of the role is connecting with students through natural conversation. “If I’m able to have that genuine connection with a person who decides to come, that’s meaningful.”

Following her graduation in December 2019, Madel hopes to embark on a career as a social justice engineer with an organization working toward positive social impact. “As engineers, you’re building, you’re looking at something and thinking about how to make it better, implement better designs. And at the core of social work, we’re focused on social justice.

“At this intersection where humans and tech meet, it’s still about the human. It’s still about the user. This is a person, this is a community. This is how they’re being affected or how they can improve. They are the ones who should be driving this new information age.”