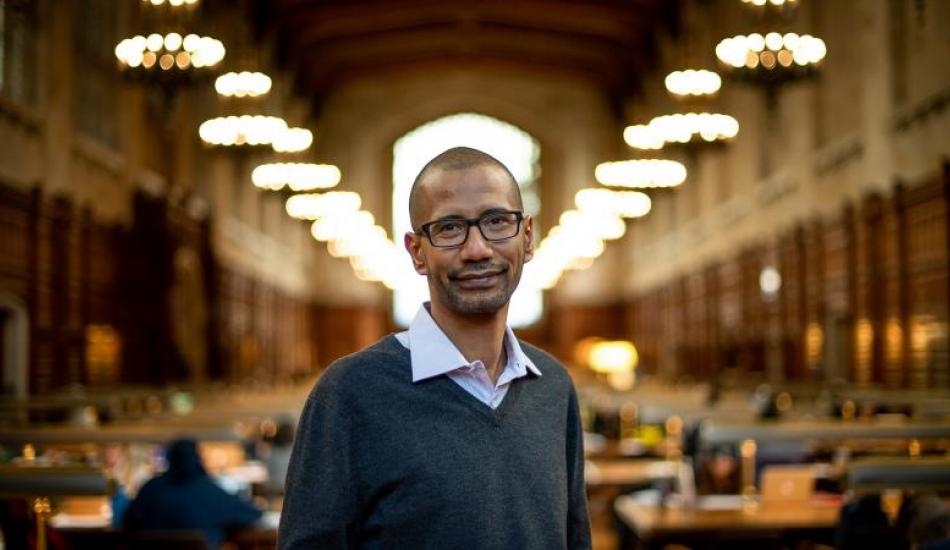 Mohamed Abbadi is researching prejudice against Muslim and Middle Eastern people in domestic and international settings, looking for ways to reduce its incidence.

Mohamed Abbadi has been places. He was a Vice President at Goldman Sachs, got his master’s at The Ford School of Public Policy, worked as an IT projects director for a real estate company in Qatar, attended a conference on corruption in Germany, and grew up in Sudan. Now, he’s here at UMSI researching development and pursuing his PhD.

Mohamed is also working towards a third master’s degree and has three kids, Talia, Dania, and Mostafa, at home. His hands may be full at the moment, but they have been for a while.

Before pursuing additional education, Mohamed worked in IT. He got a master’s in computer science from Bradley University then moved to New York City to work in the IT department at Goldman Sachs. “I realized that while IT was fun, it was not something I would be doing when I am sixty or seventy,” Mohamed said.

After deciding to move on from IT, Mohamed wanted to do something that improved society. He’s worked for multiple non-profits in a personal capacity for the past decade and half, so his research interests in his various post-computer science degree programs don’t come as a surprise. Right now, he’s on the board of Sadagaat, a nonprofit founded by Sudanese Americans to serve underprivileged communities in Sudan.  “It’s something I grew up with,” Mohammed said. “You want to give back to your community.”

As a student at University of Khartoum, Mohamed began serving in community nonprofits. He also served in the Islamic Student Society when he was doing his master’s at Bradley University and at the Charity Auction at The Ford School, University of Michigan and as a board fellow on the Board of Directors at Clean Energy Coalition, a nonprofit based in Ann Arbor. He tries to work for organizations that “maximize [his] impact.”

Mohamed’s research concerns informational and behavioral interventions related to development. His work isn’t limited in geographical scope. It’s domestic and international. In addition to his research on prejudice against Muslims in Metro Detroit, he researches corruption in the developing world. “What I try to do is address some of the challenges that face society,” Mohamed said.

Because Mohamed has lived and worked outside of the United States, he is distinctly aware of how culture informs beliefs and morality systems.  “I come from a very different culture, a very different background,” Mohamed said. “It gives me the opportunity to just not accept things as right or wrong, or yes or no.” Instead, Mohamed’s background enables him to consider cultural context and historical background when employing interventions.

Mohamed finds research about development rewarding because “it is something I can take home and apply in my daily life,” he said. “It’s not something that’s going to be a paper sitting on a shelf that may or may not get read. It moves us forward as a society.” Mohamed primarily does experimental research because he can easily see how to apply his findings.

He received his first introduction to research at The Ford School of Public Policy, where he earned his master’s. “I enjoyed it and decided to pursue further studies, and SI was the place,” Mohamed said.

Mohamed came to UMSI because he wanted to do “things that would have an impact on society. ... I realized UMSI has a combination of things I did in the past and wanted to do in the future.”

Mohamed plans on graduating with his master’s in applied economics from the University of Michigan in 2019. He finds that his research at UMSI intersects with his research in his master’s program in terms of methods. He is still figuring out what he would like to do after he earns his PhD. He has some time, as he expects to graduate from UMSI in 2021. Though he loves research, he may take his talents to the nonprofit sector, or to a think tank in Washington DC. Wherever he can do the most good.