Nick Sidor, a BSI student in the 2022 cohort, applied to UMSI after working in the entertainment industry for 10 years.

He likes talking about his journey back to school with others and tells them: “I'm about as non traditional as it could possibly get. I'm 32, I'm a single parent and I'm a transfer student.”

Last semester, Nick found himself informally advising his U-M classmates considering applying to UMSI. His biggest tip? Own your journey and don’t be afraid to fail.

“You need to make a plan and then you need to execute it. Like, if you're in programming 101, 106 or 206, nothing works unless you write the program, run it and then figure out bugs. You have to fail a whole bunch of times and get really good at failing.” 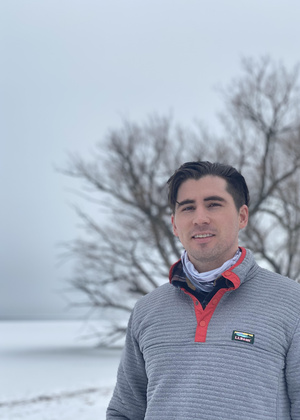 Nick had attended West Shore Community College (WCCC) in Ludington, Michigan, before becoming  a transportation coordinator in film, which took him all across the state and to the East Coast. While he loved his job and chatting with the celebrities he drove, like Diana Ross, he regretted not finishing school and decided to return home to complete his degree.

When Nick described his first time attending WSCC he said,“I was a very bad student, like I was terrible.” He was hoping no one at the school would remember him a decade later. But when he returned: “they not only remembered me, they said, ‘Hey buddy, you're going to start on academic probation and I had a GPA of 1.8.” He began by taking every class he had previously failed.

Unsure what he wanted to pursue beyond his associate’s degree, Nick enrolled as a music major with a performing arts scholarship. After classes, he drove his Scotch-taped car two hours one way to his job as a hospital patient transport coordinator in order to provide for his son. He remembers that time as “hitting the reset button” after his “wild-child days in the film industry.”

His interest in pursuing a career in information was sparked when he wrote a paper about information technology and the rise in information warfare. His professor told him about UMSI but he was skeptical he would be accepted. He decided to take a programming class, anyway.

“I still wasn't completely sold, I didn't really think I could do it. Then that semester I was awarded outstanding student in communications for West Shore,” he said. Nick was asked to give a speech to 200 people at a donor reception. His message was that even though he had every excuse in the book not to finish school with his long commute, job, unreliable transportation and parenting a pre-teen son, he was motivated to finish and if he could do it, he wanted to inspire others to find “no excuses,” too.

Multiple U-M alumni approached him after the event telling him he needed to be a Wolverine. This time he believed them.

Nick moved to Ann Arbor this past fall with his son, who’s a student at Tappan Middle School. Both of them can’t believe they’re here and still get excited seeing the blue U-M buses around town. Nick is on the UX pathway and said, “you learn so much here that you can apply to anything.”

The community has been his favorite part of the program so far. Talking about his classmates he confessed, “This is where my dad mode kicks in. The students, they're so brilliant. I'm not worried about being the top of my class, I'm more concerned with just being a part of it, because these students are movers and shakers.”

He also feels like the wait to get to U-M was worth it for the professors and said, “I feel like I'm in the right place at the right time. The teachers are just so good.”

After UMSI, Nick hopes to attend U-M’s law school and pursue a legal career with a focus on technology. When he’s not busy with his UX classes and son, Nick is on his yoga mat or volunteering with the student organization Michigan Electronic Music Collective (MEMCO). The group has been holding virtual concerts to raise money for different Detroit-based nonprofits during the pandemic.

“That's another thing that I like about Michigan,” Nick said. “Students have a bigger purpose, you know, they're not just going to school.”