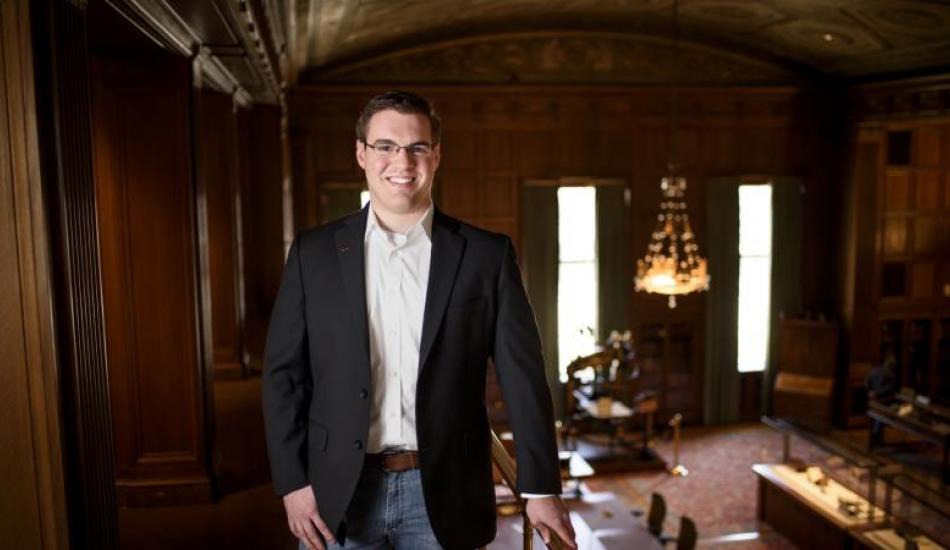 MSI student Corey Schmidt thinks about the big picture. Which is why he digitizes thousands of two-dimensional objects for the William L. Clements Library, a University of Michigan library that preserves primary source materials from the fifteenth through nineteenth centuries with a focus on American History.

After his high school graduation, Corey was invited by the director of the library at Jefferson College to be an Assistant Archivist. At Jefferson College, a short drive away from his small town of Festus, Missouri, Corey checked the metadata on county court documents and preserved them in acid free boxes when he was done. “That internship led me on the path that I’m on now,” Corey said.

Festus, Missouri has a population of under 15,000 people. There, Corey developed his penchant for supporting his community. “I really appreciate having those small town values of integrity, helping people out when they need it, and close-knit relationships with friends and family,” Corey said.

Corey majored in history as an undergraduate at Truman State University. He took a class on “big history” that changed his perception of his chosen field of study. “Big history” encompases all of history since the big bang. The field, both niche and as expansive as the universe, enables Corey to consider history from a broad point of view.

Upon acceptance to UMSI, Corey was awarded the Joyce E. Bonk assistantship, a financial aid and work opportunity through the William L. Clements Library. Since he began working at the Clements Library, Corey has helped digitize over 5,000 objects.

At the Clements library, Corey used what he learned at UMSI to literally assemble a big picture. The summer of 2018 he plotted various “Birds-Eye Views” from the late nineteenth and early twentieth centuries onto an interactive map of the United States using the Python he learned in SI 506 and the javascript he learned on the job.

Corey came into the MSI program anticipating it would prepare him for a career as a cataloger or a traditional library reference person. As he worked through the program, taking all the classes to prepare him for either the Library Science or Digital Archives track, Corey had a revelation: “The future of archives lies in the digital.”

Corey is on the Digital Archives track of his MSI program. “I’m drawn to archives because I can combine both my passion for history with a public facing aspect,” Corey said. The public-facing aspect of his work at this time is the digitization that allows the primary sources he works with at the Clements Library to be availableonline for free.

Open access is important to Corey as a information professional. He’s studied enough history to realize that when information is repressed, innovation stops. The inverse is also true. “When you open information up, a lot more ideas happen, and they happen more quickly,” Corey said. “I’m into open access because it inspires new ideas and cultivates an atmosphere of continuing education that benefits everybody.”

After graduation, Corey hopes to take a short break from archives to travel, perhaps teaching English in East Asia. Ultimately, he hopes to work at a history archive, continuing to make archives accessible to everyone.