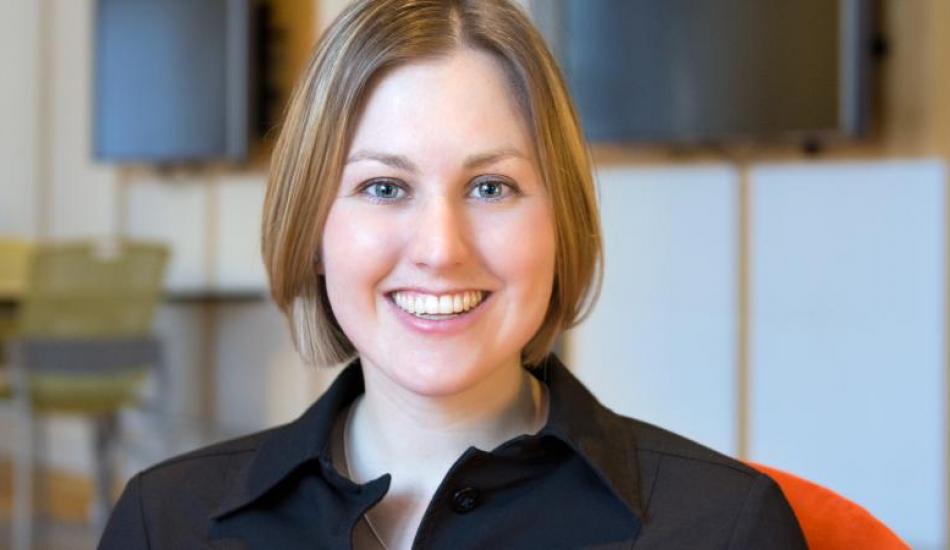 Michigan native Kristen Sheppard is a co-founder of The Broke App, one of the leading student entrepreneurial ventures at UMSI.

Kristen graduated from Michigan State University with a degree in comparative cultures and politics. Her interest in cultural studies brought her to Thailand during her junior year where she interned in micro-finance for Thailand’s largest non-profit, and to Argentina during her sophomore year where she studied social capital and development, including completing a mission trip to El Salvador her freshman year.

Following graduation, Kristen joined Google as part of their AdWords sales team, where she was responsible for consulting with small and medium businesses to optimize their AdWords accounts.

“Part of my role at Google involved sales training, in which I was teaching Nooglers (New Googlers) how to do their sales jobs effectively,” Kristen explains. “I really loved teaching, so after a while I went the other extreme and thought, ‘Maybe I should be a teacher.’”

Following two years at Google, Kristen set off for Spain to explore her passion for teaching. “I knew I was going to go to grad school. I just wanted to make sure it was for the right thing.” Kristen says of her year-long experience teaching English in Madrid, “After teaching in Spain, I realized how challenging a teacher’s job really is!”

In pursuit of something more technical, Kristen discovered UMSI’s master's in information program through a friend. “At that point, I had no idea what the field of information was about,” Kristen said. “But the more I learned about it, the more I realized it was exactly what I wanted.”

During her first semester in the program, Kristen participated in NY Innovation Trek, a two-day immersive experience where students tour innovative start-ups and practice pitching their ideas to these companies.

“I was always interested in entrepreneurship,” Kristen explains. “My grandparents own their own business, my dad used to own his own business, and my brother is the owner of his own start-up, so it runs in the family. At the same time, entrepreneurship was kind of a black box for me – I didn’t know anything about it.”

While brainstorming for NY Innovation Trek, one of Kristen’s classmates proposed tackling the idea of financial literacy for first generation college students, and a group of six students gravitated towards that idea.

“We came in with all these diverse backgrounds, and we all had different ideas about what we wanted to do with financial literacy,” Kristen said. “However, when we started doing customer discovery, we realized that none of the students we talked to knew anything about finances. No one thought they were good at it, and no one had gotten any type of formal education around it, so we started from there.”

Kristen’s team adopted a “guerilla style” approach to customer discovery, in which they interviewed students walking around the campuses of 11 different universities and colleges throughout the state of Michigan. She describes how some students openly answered questions regarding personal finances while others were hesitant to share these details.

By the end of fall semester, Kristen and her teammates were at a crossroads.

“We got really great feedback from the NY Innovation Trek, so by the end of the semester we asked, ‘Who wants to keep doing this?’” Kristen explains. “Finally we came together in the winter and decided, ‘Let’s pursue this and see how it goes.’”

“We continued talking to more people and learning about the banking space because none of us had backgrounds in banking or financial management,” Kristen explains. “U-M is unique in that it provides a lot of opportunities for students to push their ideas to different audiences, and in doing that you get a diverse range of feedback.”

As the project continued to progress, Kristen made The Broke App the focus of her summer internship.

She joined DXT Launch out of TechTown Detroit, a student business accelerator program that provides funding for students pursuing startup ideas. There, Kristen focused on value creation and developing a Lean Business Canvas model – which she explains as the lean version of a business plan – while conducting over 100 user research interviews throughout the summer. She also carried out initial prototyping and received feedback on both lo-fi and hi-fi prototypes.

“It was hard work, but it was a lot of fun,” Kristen said. “I got a lot of exposure to the business side and the design side. It lends itself well to being iterative and being able to change the product idea to actually make it valuable.”

During fall semester of her second year, Kristen enrolled in SI 663 (Entrepreneurship in the Information Industry), where she honed her skills in the iOS development language Swift and entered business competitions, including Accelerate Michigan – a state-wide innovation competition in which The Broke App placed fourth.

Now in the winter semester of her second year, Kristen is focusing her attention on the development of an MVP (minimum viable product).

“We’re continuing to pitch to places such as A2 New Tech, and we’ve started gaining interest from investors,” Kristen said. “However, you need to have an MVP out there to show the real value.”

She adds: “I know where we need to go with this. It’s just a matter of time and trying to balance school and scheduling with the rest of The Broke App team.”

She continues to discuss some of the challenges and rewards of working on the app.

“It’s such a challenge to balance everything you need to do, and with so many distractions, you need to be able to focus on what’s important,” Kristen explains. “On the other hand, when you work on something for so long, you really start to care about it. You meet people that it could impact and you want to make it for them, so I think that’s what keeps me going even though it’s a lot of hard work.”

During her first year in the MSI program, Kristen served as Vice President of the School of Information Master’s Association (SIMA), where she consulted with faculty on curriculum changes for the MSI program. She is currently part of the Learning and Education Technology group (LETSI), which is a community of EdTech enthusiasts from schools across campus and the larger Ann Arbor community.

Kristen also two part-time jobs – she is a Visualization Consultant for the Hatcher Graduate Library and a Digital Marketing Manager for Integration Systems Management in Detroit.