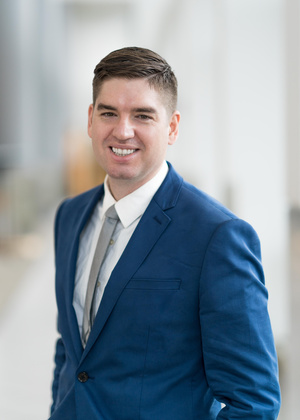 John O’Malley’s path to becoming a health data analyst in the oral health field began in suburban Chicago and made stops in Tonga and Liberia by way of the Peace Corps. He came to UMSI to become a major contributor in oral health analytics.

When John began high school, he wanted to be a dentist. He started college in 2004, and as a result, had the unfortunate lot of debuting on the job market in 2008. He wanted to do something, to go somewhere, very different from his hometown of Glenview, Illinois. The Peace Corps seemed to offer that opportunity.

In 2008 the Peace Corps did not allow applicants to pick the countries where they would like to serve. John ended up in Tonga, an island in the South Pacific. In Tonga, John did not find the Peace Corps experience he had braced himself to encounter. He described Tonga as “idyllic.”

In Tonga, John taught high schoolers science. His biology background primed him for the work. “I loved my service, but I still wanted something different,” John said.  After his initial 27-month-commitment, he signed on for six more months of the Peace Corps, working in Liberia as a Volunteer Leader.

The Liberian post had been closed for some time due to a civil war and John helped the Peace Corps get re-established in the country. He traveled to the different Peace Corps sites in Liberia and supported the volunteers as the post grew. Working in a leadership capacity seemed like the natural next step as he sought other ways to contribute.

Since returning from the Peace Corps, John has been working in public health, specifically in oral health. He’s served in a variety of roles doing program development, program design, grants management and trainings.

However, he knew that if he wanted to reach his career potential, he needed a graduate degree. While many returned Peace Corps volunteers enroll in public health programs, that seemed redundant to John after years of working in the field. A work experience with tableau visualization with surveillance received a lot of positive feedback and put him on the path to health informatics.

The Paul D. Coverdell Fellowship covers all tuition for some returned Peace Corps volunteers, and John was offered the fellowship when he was admitted to the MHI program. In March of 2019 John quit his job and began taking U-M online coding courses in order to test out of the coding classes required by the MHI program.

He hasn’t wasted any time since arriving in Ann Arbor. “The people doing what I’m interested in are here [at U-M] and they usually answer your emails and will set up a meeting,” John said, referring to the networking opportunities the University has granted him. “I’ve found the faculty very supportive of what I’m doing.”

Altarum operates MiDr, a statewide dental registry that streamlines communication between dentists and physicians. Alterum brought John on to help expand the registry beyond state borders.

At Delta Dental John analyzes Medicaid enrollee claims to better understand how children use its services. He also helps strategize the construction of a platform for presenting information to non-data science professionals who are involved in decision making processes that affect those enrolled in Medicaid. “The MHI degree is helping me with the skills to perform the analysis but also we have to build better information systems,” John said.

Since John has moved to Ann Arbor and jumped full force into the dental informatics scene, he has had to pause some of his hobbies. While he still rollerblades when he gets the chance, he’s retired from roller derby, a sport he participated in in Chicago.