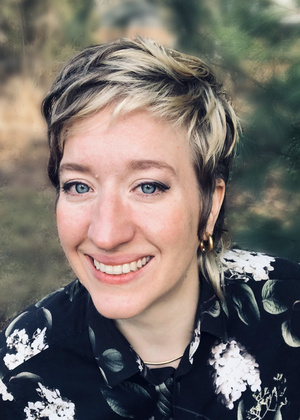 “I think it’s about humanizing.”

For Kayj Garrison, whose worldview incorporates the experience of an AmeriCorps alum, a licensed massage therapist, a second-year MHI student, and more, that’s what the current state of health care comes down to.

Across all those roles and now mere months away from earning their MHI at UMSI, Kayj has been pursuing a “common thread of interest” in population health.

“I have no idea what I’m going to end up doing, but I know it’s going to be meaningful,” Kayj said, “and there’s going to be multifaceted, different components in play. But I thought and still think that the health informatics program was a big part of that.”

A nearly lifelong resident of Ypsilanti, Michigan, Kayj received their associate’s degree in photographic technology from Washtenaw Community College while most people their age were graduating high school. After that, they served with AmeriCorps for two years in California.

“There was a lot of community engagement,” Kayj said. “It was really focused on social behavioral health, but getting into working with women and families who are homeless or at risk of being homeless … I was kind of doing social work stuff.

“ … And then I got into massage therapy.”

Kayj said they wanted to shift away from social work to work with people directly. Through a “really science-based, anatomy-based, physiology-based” program, Kayj learned about a place they could make the kind of personal difference in people’s lives they were really after: a unique clinical massage division of Beaumont Health.

Beaumont got them trained and working with patients, electronic health records, treatment plans, and more. For Kayj, it was a fascinating time to be in the department because they were truly working at the leading edge of clinical massage, unparalleled even by any kind of similar program at U-M.

“And that gap was so prevalent to me, so it’s kind of a fascination to come to U-M and study health informatics,” they said. “I realized I just had this big interest to learn more about what it would take to have a shift, to have more innovation, including complementary alternative medicine modalities.”

Kayj began to explore that interest by going back to school for their bachelor’s in public health at Wayne State while at Beaumont.

“Pulling in my experiences working with community organizing and working with social behavioral contacts of health, I thought public health made a lot of sense,” they said.

And the holistic perspective Kayj grew through their diversified background follows them to UMSI today.

“The idea of wellness and what health looks like ⁠— that is always going to be present with my perspective … because that is my profession,” they said. “... I’m always going to think about health in that frame.”

After they got their bachelor’s in public health, Kayj said they weren’t able to find a job in their field and were late-admitted to the MHI program “in the nick of time.”

“I was really drawn to the fact that the MHI program was partnered with the School of Public Health and the medical school,” Kayj said. “To have those relationships to me felt like a true attempt at intersectionality on these different frameworks, and being a community organizer …  my value set is about collaboration. … I feel like at SI there’s a lot of playfulness around creativity for that because technology is everywhere.”

Also at the Ford School finishing up their science and technology public policy certificate, Kayj credits UMSI with bringing out their interest in public policy through a unique Alternative Spring Break opportunity.

“Before the pandemic, ASB connected me to the Open Technology Institute down in D.C.,” they said. “That week was amazing, getting to work with policy analysts at a think tank … who were really fired-up and experts in their field. I wanted to learn more about policy. …  There’s a lot of overlap between that certificate program and the MHI, so I was able to pull it off.”

Graduation is right around the corner for Kayj, who will officially walk away with their MHI after completing an internship at 360 Detroit through the Global Interaction Engagement Program (GIEP) this summer. Beyond that, Kayj is thinking about the PeaceCorps.

“I was working on going to PeaceCorps down in Peru and then I pulled my application to pursue the MHI program when I found out about it,” they said. “But now … I’m applying to a science and technology position in Mexico.”

Always drawn to international work, Kayj said they dream of one day working for the UN. First up on the post-grad agenda wherever opportunity takes them: using their MHI degree to humanize processes that impact people’s lives and health.