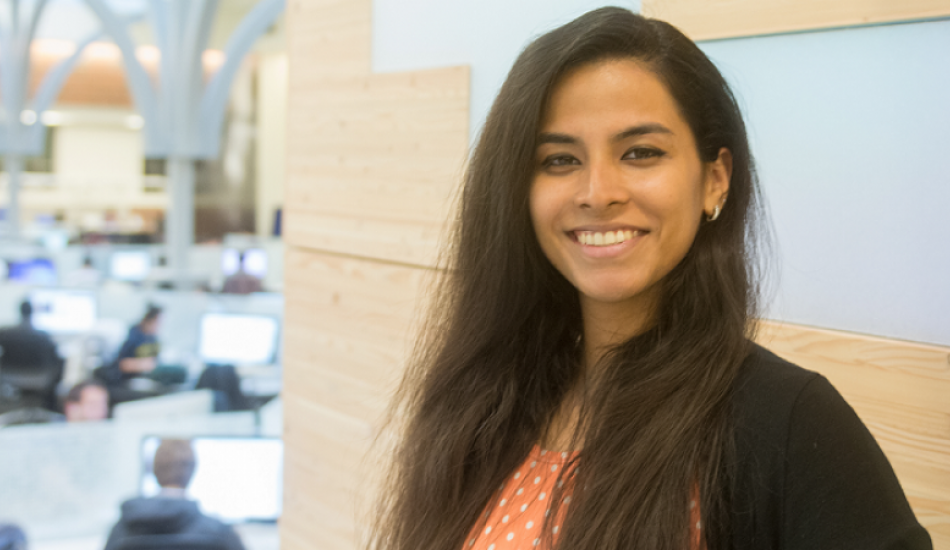 Having once jumped out of a plane 14,000 feet above the Australian coast, human-computer interaction student Ayshwarya Balasubramanian acknowledges that she has a bit of an adventurous side.

“Skydiving is incredible,” she says. “I could look over the land and the ocean—it was the most beautiful view of earth I’ve ever had.”

In her first year at UMSI, her love of seeking out new experiences has taken her to nearly every place to eat in Ann Arbor and even helped her embrace the brutal cold that can accompany Michigan winters, something she wasn’t exactly familiar with while living in India.

“I’ve never run into wind chill before, apparently that’s a thing here,” Ayshwarya laughs. “But I love going places and I love socializing, and that’s better than sitting inside and sulking about bad weather.”

Ayshwarya came to UMSI from Hyderabad, India, where she earned a bachelor’s degree in computer science engineering from Osmania University and later worked as an analyst at Deloitte. In that role, she conducted web application programming and helped develop projects like a data analysis system that can quickly flag potentially fraudulent data from 5-10 million submissions at a time.

The project that garners the most interest from people she meets in the U.S., however, is the application she helped build to prevent college students and hackers from manipulating Heisman Trophy voting. Deloitte audits the votes for the award given each year to the top player in college football.

“In India, it wasn’t too big of a deal because the Heisman Trophy isn’t a big name there, but once I got here, people were really impressed by that application and now I know why,” Ayshwarya says.

Wanting to learn more about programming, particularly on the client side, Ayshwarya began looking into graduate programs that offered an opportunity to learn about improving technology in ways that could help people better understand and utilize the devices around them.

“It’s kind of funny, I Googled where I could study for a master’s in human-computer interaction and UMSI was one of the top 10 schools, and I just thought the opportunities here were great” Ayshwarya says.

Since arriving at UMSI, Ayshwarya has allowed her venturesome spirit to guide her as she’s gotten involved in a number of activities, groups, and events. She made her first trip to New York in the fall and presented an idea at Innovation Trek. She also recently traveled to Austin, Texas for South by Southwest, where her team pitched its idea for BusyMode, a mobile application that aims to ease the anxiety that people develop and associate with the use of mobile devices.

BusyMode would provide users who have not received a reply to a call or a text message with either a timestamp or notification that would let them know that the person they are trying to reach is preoccupied or hasn’t touched his or her phone in a while.

“We found that a lot of people freak out when the other person hasn’t responded to calls or messages,” Ayshwarya says. “We want to deal with that anxiety and don’t want people to tie themselves to technology so much.”

Ayshwarya has also enjoyed participating in MHacks hackathons, coming away impressed with the finished products that other students created, as well as the chance to develop her own projects and ideas. She notes that events like the hackathon, career fairs, and New York trek have given her valuable opportunities to connect with UMSI alums and others who can offer advice as she prepares for a career in interaction design.

As she approaches her second year at UMSI, Ayshwarya wants to continue embracing as many new and interesting experiences she can.

“I like the community space here, I like hanging out with other SI students, and there’s always something going on,” she says. “There’s always a conference, a guest lecture, or a CEO visiting—there’s so much to do here, there’s not a single day I’d want to waste.”