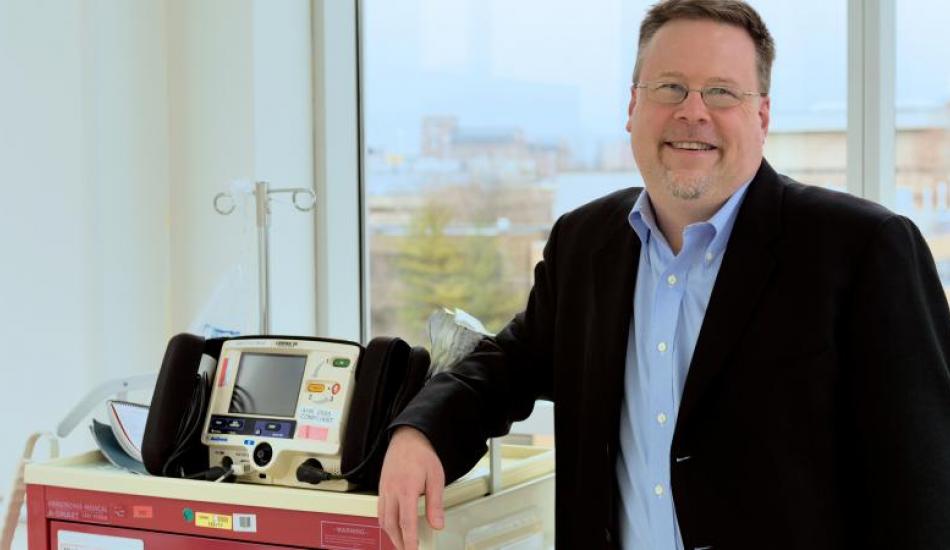 Looking back, even UMSI PhD candidate Allen Flynn’s early encounters with computing had a pharmacy tie-in.

In 1983, his father, a pharmaceutical scientist at the U-M College of Pharmacy, brought home a computer for research and writing. Allen, then a teen, started using it to code “silly programs,” he says.

Allen didn’t initially plan to follow his father into the pharmacy field, but after his first two semesters at U-M, he ended up deciding on pharmacy after all. During his Introduction to Pharmacy course, in 1989, he was already thinking about how to combine computer science and pharmacy. “The paper that I wrote—I think I still have it at home—was called ‘Computers in Pharmacy,’” he says.

Although Allen’s career since has followed a winding route, he has kept one foot in pharmacy and the other in technology at most points along the way. During five years as a network analyst at a technical operations center, though, he was the only healthcare professional in the building, surrounded by computer scientists and engineers. “Thanks to them, I became a very good, very methodological troubleshooter,” he says.

Eventually, the company where Allen worked was bought by WorldCom, which by the early 2000s became embroiled in a financial scandal that ended in bankruptcy. He anticipated the company’s fall and left three months before the bust to return to pharmacy.

Through a mentor, U-M College of Pharmacy Associate Dean for Student Services Nancy Mason, he heard that a local hospital, St. Joseph Mercy, needed a pharmacist with an IT background. An understanding of both fields was important for the job because pharmacy IT systems engender risks, he says; for example, every time a new drug debuts, systems must be carefully configured to make sure the right doses appear.

After several excellent years at St. Joseph Mercy, a reorganization there prompted Allen to move to U-M as a regular staff pharmacist. However, within a month, James Stevenson, then director of pharmacy services at U-M Health Systems, recruited Allen for an open IT pharmacist’s role at U-M. There, he had the opportunity to develop his leadership skills as a manager and to collaborate with many others to improve the U-M Hospitals’ Electronic Health Records (EHR) system.

In 2012, U-M decided to replace its EHR system. By this time, Allen had almost 10 years in health IT and was offered a job overseeing the medication-related functions of the new EHR. However, his experience with several EHR systems, all with similar design flaws, prompted him to take a different path: Rather than help implement the new EHR, he wanted to work on improving the design of all EHRs. At the time, he says, “I knew I didn’t have the training or expertise to redesign these complex EHR systems.”

In fact, he couldn’t think of anyone else who had the pharmacy practice experience, technical know-how, and information science background to design the medication-related components of the next-generation of EHR systems. He decided to become that person and started discussing the possibility of doctoral studies with his future advisor, Charles Friedman, a UMSI and School of Public Health professor and Learning Health Sciences chair at the Medical School.

At UMSI, Allen’s main project involves a system he’s created called MedMinify, which scans a person’s home medication regimen and advises how it might be simplified. For example, perhaps two medications are available in one combination capsule, or a thrice-a-day pill could be replaced with a once-a-day one. This is a particularly relevant project because longer lifespans have led to many people taking multiple medications to treat chronic disease, and evidence shows many home medication regimens can be made easier to manage, Allen says.

His research will evaluate his system. “How do you know that systems like MedMinify are actually helping people—in the end that’s what we really need to know,” he says.

As a research analyst at the Medical School, Allen also works with Friedman on developing supporting infrastructure for a learning health system. This system enables lessons learned by individual doctors through patient encounters to be routinely gathered and shared to benefit others.

One theme Allen sees running from his past and into his present work is the profound transition and upheaval in healthcare caused by information and information resources.

“The background for all my work is this: We have a large amount of biomedical knowledge in the world now and we are struggling to apply it during routine processes of providing care,” he says. “So we’re at this point where we’re going to have to get much better at collecting and moving knowledge continuously throughout the world to improve global population health.”

Another important theme Allen has seen throughout his professional and academic life is the importance of collaboration and teamwork when applying information resources to improve health. “To make valued contributions that actually improve human health and well-being, many people of diverse backgrounds need to work together for years,” he says. “I am very thankful that the faculty and staff of UMSI have made it possible for me to become a novice member of scientific teams interested in designing and developing new ultra large-scale information systems for human health.”