Faces of UMSI: Shiqing "Licia" He 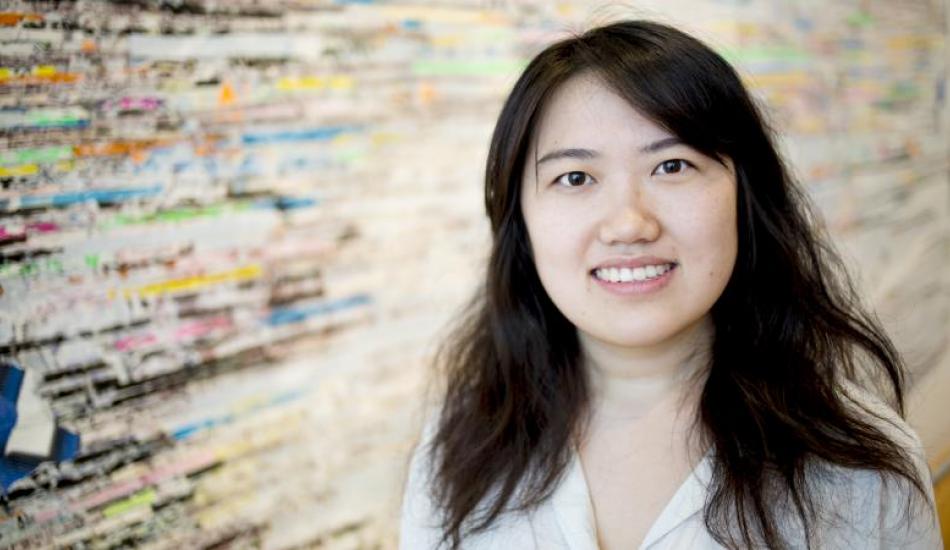 Shiqing "Licia" He is blending her passions for art and math as she learns to turn data into stunning graphic visualizations.

Shiqing He can’t pinpoint when her passion for art began.

It may have begun in her native province of Yunnan in southwest China, where she recalls memories of the locals extracting dyes from native plants to color decorative fabrics or to paint. Those recollections would eventually inspire a fellowship project.

“I’ve always been interested in art,” says Shiqing, whose work has been showcased in individual and group exhibitions in New York state and Ann Arbor. “But I don’t know when it began or what the inspiration was.”

For Shiqing, whose friends call her Licia, art is an integral part of her life, one she has been able to meld with her doctoral studies – and, she hopes, a future career. As a third-year doctoral student at the University of Michigan School of Information, Licia is focusing on information visualization research. Specifically, she’s interested in the intersection of art and technology.

“I think what traditional art needs to do is connect with technology,” she explains. “There are interesting things you can do, and I want to see how I can apply technology to traditional art.”

She chose UMSI for several reasons after applying to several other colleges. While she was impressed the campus and UMSI professors (one of them was Eytan Adar, who is her advisor), she was also drawn by the variety of interdisciplinary practices. She saw UMSI as a place that offers space for creativity. “I was looking for the possibility of joining my interests together,” she says.

Those interests, math and art, evolved during her undergraduate years at Union College, a small liberal arts school in Schenectady, New York. She initially aspired to become an English-Mandarin interpreter, but her passions for math – and art – gelled. She earned a bachelor’s degree with a double major in computer science and studio art.

Before arriving in Ann Arbor, Licia spent a year abroad as a Thomas J. Watson Fellow, one of 44 awardees in 2014. She pursued an independent study on natural dye production and related art, traveling to South Korea, Japan, Spain, Italy and Australia and others. During that time, she published a weekly blog of her experiences, ‘The World is a Big Dye Vat,’ written in her native Chinese and including images she photographed.

As she enters her third year at UMSI, Licia remains focused on studying data visualization, how to turn data into graphic visualization. It’s a process that uses her programming and design skills. Often, she sketches what she envisions as an illustration before she figures out the necessary coding.

Art, it seems, is never far from Licia.

During her first year on campus, she’d host casual gatherings with her fellow students and teach them how to doodle, sketch and draw. One of her passions at Union College was printmaking. Her website, shiqinghe.com, highlights some of her work.

Wherever her career takes her, art will be a part of it.

“I want to make cool art,” she says. “I love art. Technology makes it easy for me.”