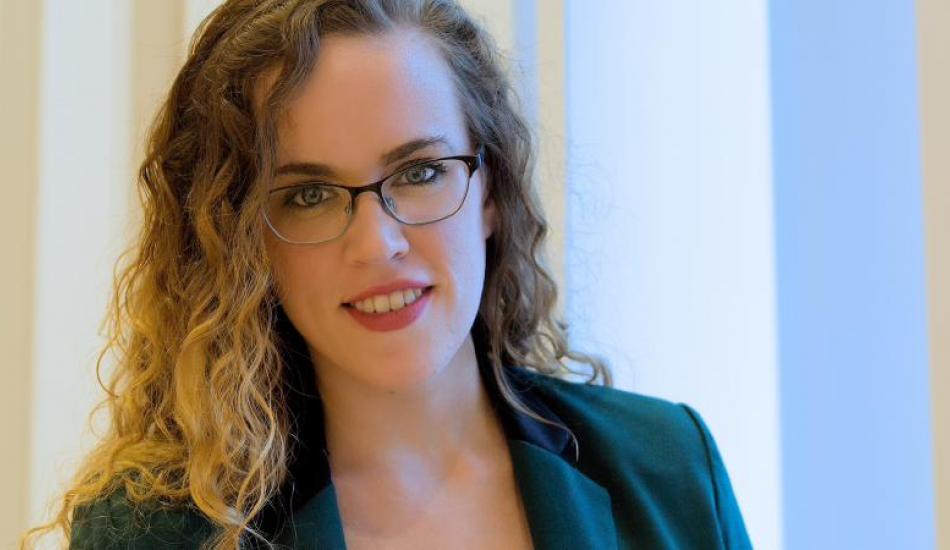 Chanda Phelan is working to close socioeconomic gaps by studying how technological advancement is linked to career success.

Most paths to UMSI don’t include a soybean pathology lab, but for PhD student Chanda Phelan, that’s where it all got started.

After graduating in 2009 from Pomona College—“not a good time to graduate, especially with a BA in English,” she says—she moved home and started working in the lab, at Ohio State. Because of the nature of her work, she listened to a lot of audiobooks, specifically, books on behavioral economics, like Daniel Kahneman’s Thinking, Fast and Slow and Dan Ariely’s Predictably Irrational.

Chanda became intrigued and decided—even with little background in math—to apply to graduate programs in behavioral economics and related fields, including the MSI program at UMSI. She enrolled, focusing on information economics.

In the fall semester of her second year, she began working with UMSI professor and associate dean for research and faculty affairs Paul Resnick on a field experiment related to his research project Commit to Steps. He suggested that she apply to the PhD program at UMSI, and she did, switching fields again from information economics to human-computer interaction.

“From the outside, it looks like I wandered a lot,” she says. “From the inside, it feels like I knew what I wanted and just took a while to find where to express it.”

At Michigan, Chanda continues to work with Resnick on Commit to Steps, which focuses on how to get people to stick to exercise goals. Theories suggest that committing to such goals publicly in online programs should make people more likely to stick to their plans, but so far, it hasn’t turned out that way, she explains. They look at why this is the case and how the programs can be tweaked so that they do work.

“Building tools that help people align what they want with things that actually help them meet their goals: I’m up for anything like that,” she says.

This drive to use technology to help people is also behind Chanda’s other project at UMSI, which is related to cognitive scarcity, the idea that “deprivation puts strain on your cognitive resources, so you’re not as good at making decisions,” she explains.

People living in poverty or other adverse circumstances are often operating under this cognitive strain, but in many cases, tools that try to make life easier for these people are designed by people who are not affected. This can result in tools that can’t really be used effectively by the people they’re trying to help.

“So we’re ending up with this problem where instead of empowering people, we’re kind of widening the gap for people who can’t use these tools,” Chanda says. “I’m concerned about people being left behind.”

A simple example is word processing software, she says: If you can’t use this, your career opportunities are seriously limited, and the gap will only widen as technology becomes more and more central to socioeconomic success.

“The further we advance, if we’re spreading out the intellectual capital like that, we’ll have a whole group of people who are never going to move up because everything has a technological element,” she says. This should be considered at every step when people are designing products or coming up with solutions to address problems faced by disadvantaged people, she adds.

Chanda, who hopes to go into academia, credits the UMSI faculty’s openness to students for her decision to pursue a PhD at Michigan. “Even though the master’s was a professional program, if I went to faculty during office hours and asked about research, they were willing to talk,” she says.