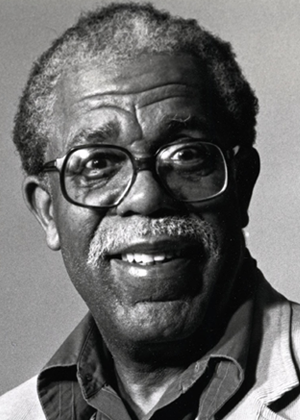 Dudley Randall received his master’s degree in library science from the University of Michigan in 1951. While working as a librarian for the Wayne County Federated Library System, he founded Broadside Press in 1965 with the goal of “getting good black poets published.” Initially, though, Randall started the press to protect the rights to his poem “Ballad of Birmingham,” which had been adapted into a folk song by Jerry Moore.

The Dictionary of Midwestern Literature calls Randall “the most influential publisher of new voices in black American poetry beginning in 1965 and ending in the mid-1980s. His achievement in terms of Midwestern literature can be seen in his ability to discover and publish a vast array of black authors during this period… to give voice to those writers who had no other outlet.”

Randall was a poet in his own right, and published several volumes of poetry. His best-known poems include “The Ballad of Birmingham” and “Booker T. and W.E.B.”  In 1981, Mayor Coleman Young named him Detroit’s Poet Laureate.

Among his many awards and honors are a Lifetime Achievement Award from the National Endowment for the Arts, an honorary doctorate from Wayne State University and the Distinguished Alumni Award from the University of Michigan School of Library Science in 1987. Following his death in 2000, the University of Detroit Mercy Library, where he worked as librarian and poet-in-residence in the 1970s, was deemed a National Literary Landmark by Friends of the Library of Congress.