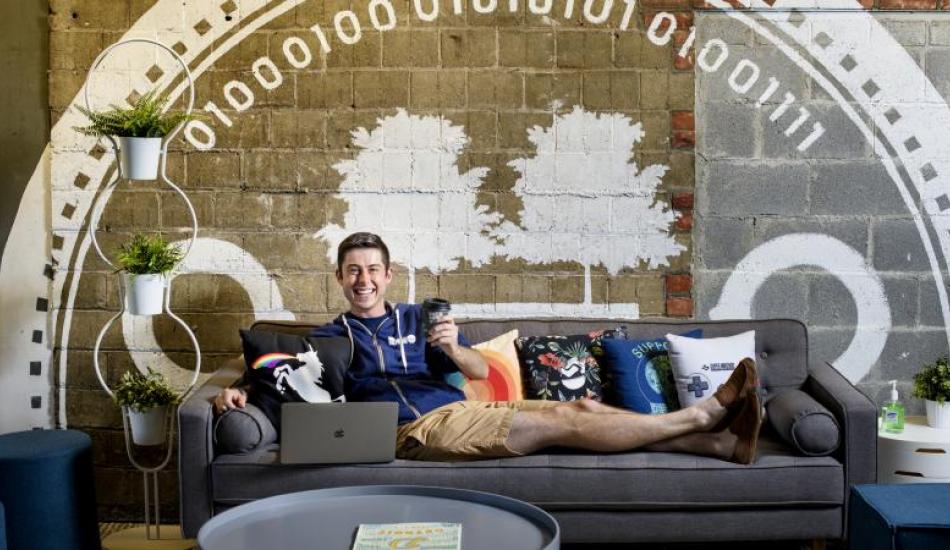 Matthew Cloutier is teaching students about music, marching and data-oriented programming as a graduate student instructor -- while pursuing his own studies in human computer interaction.

MSI student Matthew Cloutier’s Graduate Student Instructor (GSI) position requires him to teach over twenty hours a week and be on campus (or on the campus of another university) on Saturdays. He doesn’t mind.

Matthew instructs the Michigan Marching Band (MMB).“It’s 100% worth it.” Matthew said. “The students in the organization are incredible and it’s a joy to be around them and be a part of making what happens on Saturdays happen.”

Matthew helps the Marching Band with their technique and musicianship during their frequent practices. During games, he make sure everyone is where they need to be and everything runs smoothly. Sometimes, he conducts on the sideline ladders during the Pregame and Halftime shows.

As an undergraduate at University of Michigan, Matthew was no less busy. He was a Computer Science and Psychology double major and active in the Michigan Marching Band all four years. The first three years he played trumpet. The fourth year he served as drum major, the student leader of the Band and the public face of the organization.

At the University of Michigan, drum majors teach the Band how to march in three different styles: traditional step, lockstep, and glide step. They are performers who march, twirl a baton, backbend, and strut across the field with precision. “I wanted to become Drum Major so that I could serve the Band,” Matthew said. “The MMB had served as an incredible support system for me during my time in Ann Arbor and I wanted to make sure that people coming into the Band felt included and welcomed by the organization.”

After graduating with his bachelor’s degree, Matthew worked as a software engineer for Hooklogic, which Criteo acquired during Matthew’s time with the company. “In doing [software engineering] there were a lot of times when I wanted to dig deeper into the why of why we were building the products the way we were building them, what drove those design decisions,” Matthew said. Through his desire to learn more, Matthew discovered that he was interested in becoming a product manager.

A product manager serves as the communicator between the engineers, the designers, and the business people. Matthew enjoys interacting with people, and realized he would be more able to do that in a product manager role.

Matthew applied to UMSI, and only UMSI, to support his new career goal. Now, he studies Human-Computer Interaction. He views his current major as “a mix of computer science and psychology,” his two majors as an undergraduate. “Kentaro Toyama made it very clear to us that technology is the amplification of human forces,” Matthew said. “As someone with a background in tech, that hasn't been stressed to me before.”

Last summer, Matthew secured an internship at Duo Security, and got to try project management. “It was a lot of fun,” Matthew said. “In addition to working as a project manager, they gave me the opportunity to sit down for coffee chats with some of the product managers and be somewhat involved in that space.” He can see himself working at somewhere like Duo Security after graduation.

Because of his history with the Marching Band, Matthew was able to fund his post-graduate degree at UMSI through a GSI position. He’s grateful that the University of Michigan allows students from outside explicitly music-focused tracks to instruct the Marching Band.

Last year, after football season ended, Matthew was a GSI for SI 206: Data-Oriented Programming. When asked what accomplishment he is most proud of, Matthew cites his student’s final projects. “Some of them went super above and beyond on the project,” he said. “You see these people coming in with little to no knowledge of any of this, then coming out making something tangible and, in a lot of cases, useful and awesome.”

Matthew enjoys teaching because it enables him to learn more about the subject he teaches. “It forced me to dive deep into some of the topics and familiarize myself with things I hadn’t learned thoroughly when I initially learned them in the past,” he said.

As a student, Matthew wants to learn as much as possible about technology and how it can be leveraged to improve the world. As an instructor, Matthew aims to impart his knowledge to his students and enable them to “do great things.”