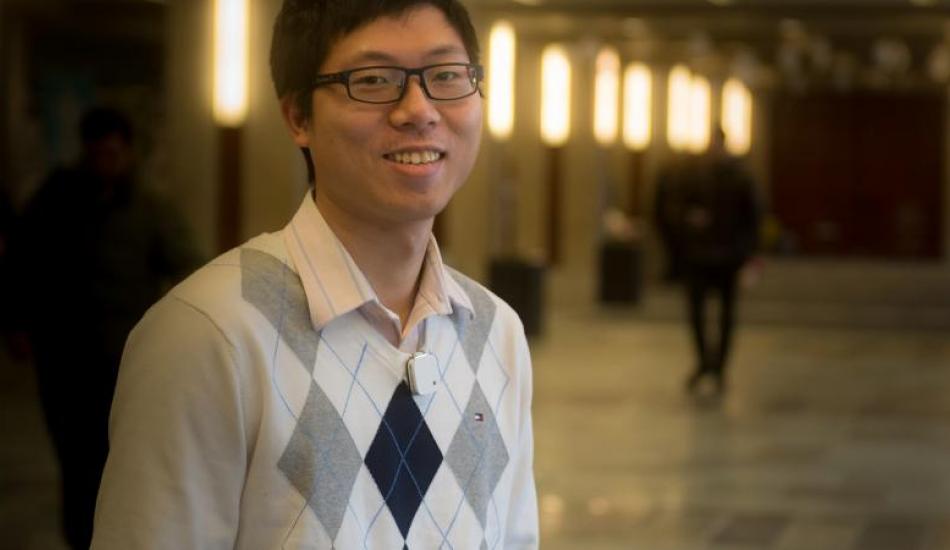 On the fourth floor of the North Quadrangle academic building, in the DoIIIT Studio makerspace he helped found, UMSI PhD student Chuan-Che "Jeff" Huang has several projects on the go.

The neat ranks of colorful Post-it notes lined up on a large, black board by the door are evidence of brainstorming he’s doing for his main project, an intelligent thermostat.

“Basically, the idea is to create a thermostat that can understand where you are and if you’re hot or cold and encourage you to save energy,” he explains.

The system, the subject of a recent pilot study, includes a wearable device to infer skin temperature, sweat level and metabolic rate as well as sensors in each of a house’s rooms that detect where people are and predict how comfortable they feel, ideas central to what’s known as the “Internet of Things.” The pilot study involved testing the parts of the system in three homes; next, Jeff will deploy the refined system in 30 households for a long-term study.

Jeff, who received his MSI from UMSI in human-computer interaction and his BS in computer science from National Tsing Hua University in Taiwan, spends 70 or 80 percent of his time on this main project, but he reserves 20 or 30 percent for exploring new things he wants to learn or that he thinks might be possible areas for future research.

One of these exploratory projects is Nenrin, or “tree rings,” a project combining data with design. The increasing ubiquity of sensor technology and human-centered technology means a concomitant increase in data about people’s experiences, he explains, data that can become a resource for them. “You can use data to look back at your life.”

Combined with the increasing availability of personal object makers such as 3D printers and multifunctional fabricators, this data can be used to create artifacts that tell people’s stories in physical form, enabling people to look back on their experiences while keeping personal information private.

An example is a lamp displayed in the makerspace. From the outside, it’s just a triangular imitation-wood base, with 40 clear triangular discs of different sizes stacked into a sort of cylinder whose edges curve irregularly but sinuously. Plugged in, light shines through the disks from inside.

In fact, though, this lamp tells the story of a friend’s pregnancy. Each disc represents one week, the size determined by changes in data about the mother’s body as the pregnancy progresses. A cut-out in the center of each disc mirrors the mother’s changing shape, and a corner of each disc swings outward to reveal a few words about the mother’s experience that week. On top balances a stick with a colorful, lace-like shape dangling through the central hollow; this was created from data on the woman’s labor experience, such as heart rate.

The Nenrin lamp, a collaboration with UMSI PhD candidate Jasmine Jones, recently won the Redefining Art Award in the Operation: Redefine Art contest and will be included in a U-M Duderstadt Center showcase and in an issue of the Blueprint Literary Magazine.

While Nenrin focuses on a personal experience, another project, the Internet of Shoes, traces connections between people. In the back room of the makerspace, Jeff pulls out a tangle of neon strands of plastic. He has coordinated with Stamps School of Art and Design assistant professor Roland Graf and others to create these colorful light-up shoelaces with sensors. The idea, Jeff says, is to distribute the shoelaces to people at a large, nighttime street art festival. The sensors would cause the shoes to light up in different patterns as people interacted, perhaps enabling a new way of looking at things such as swarm behavior.

Like the thermostat and the lamp, the Internet of Shoes springs from Jeff’s drive to combine machine intelligence, interaction design and human centered design to create physical things that are engaging and enchanting. “The domain that I want to be in is really to combine enchanted objects with context-aware computing,” he says.