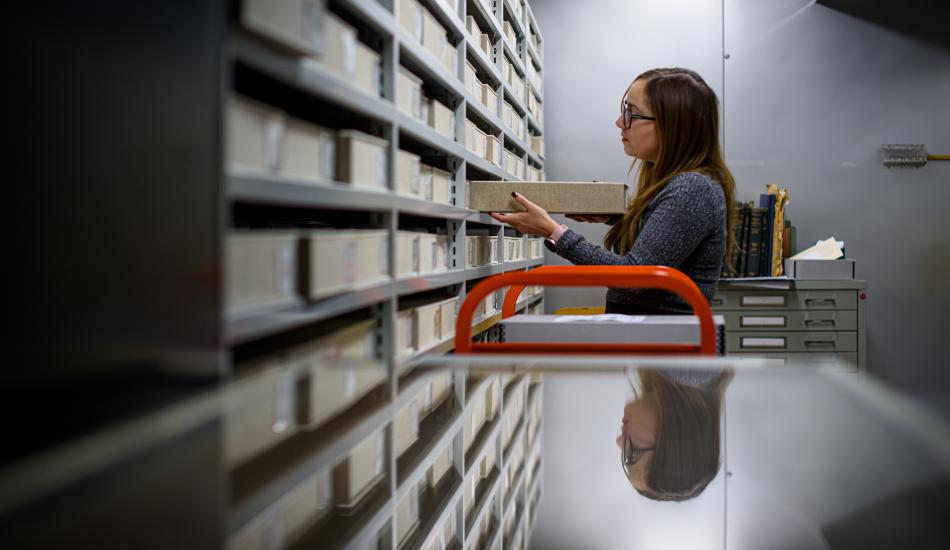 Allison Thorsen is bringing new life to pieces of the ancient world with her new exhibit, Literature in Fragments: Lost Greek Works at Michigan.

Second-year MSI student Allison Thorsen is bringing new life and attention to pieces of the ancient world as curator of a new exhibit at Hatcher Graduate Library. The exhibit, Literature in Fragments: Lost Greek Works at Michigan, showcases compelling remnants of literary manuscripts that the world otherwise has minimal or no known parts of, including Aristophanes’ Heroes, lyric poetry, Homeric parodies and musical notation.

Allison curated the exhibit as a student assistant with U-M’s Papyrology Collection, which contains an estimated 18,000 fragments spanning ~2,000 years. She said that while choosing material to display from the world-renowned collection, she was drawn to lost works of literature. “I think showing something like this where we only have bits and pieces of things exemplifies why we should continue studying papyri and making them accessible to a wider audience,” Allison said. “However, I also wanted to display how much we don’t have of the ancient world.”

The exhibit provides a look at some ancient pieces in the collection that are rarely handled and even more rarely shown. “These are things I found in our collection that have never been out for the public on a tour, and they’ve certainly never been on display like this,” Allison said. A couple of the papyri were even specially glazed and treated by curators for the exhibit. “When you look at the whole body of the collection, most of it is commonplace stuff like tax receipts, but these were pieces that spoke to me,” she said. “After I leave UMSI, I want to work with special collections material that is literary, which is one of my primary inspirations for taking this path.”

Citing accessibility as one of her core values, Allison said she’s currently in the process of creating a corresponding online exhibit to be launched in early 2020. (This article will be updated with an active link upon the exhibit’s publication to the U-M Papyrology Collection website.) “The website is an interesting way to show how interdisciplinary this work is and how relevant the study of information is to the study of the ancient world,” she said.

Allison’s interest in interdisciplinary studies took off during her undergraduate career at Macaulay Honors College at Queens College in New York, where she majored in classics, Latin, ancient Greek and comparative literature. “As much as the Greeks and the Romans are my primary interest … I don’t like studying them without a context of how other cultures do things differently,” she said. “They aren’t in a bubble.” She said studying abroad in China during her senior year was a strong start in rounding out her knowledge of the ancient world. “It highlighted the different ways of living and the different ways societies come to be,” she said.

Allison designed and pursued her comprehensive education as an undergrad with an eye toward a career in libraries. After graduating from Queens College, she said she opted to continue studying library science at UMSI because the MSI program was so flexible. “One of the things I really like about UMSI is it allows me to make my own path,” she said. There was room in the program for her to be involved in interdisciplinary studies while pursuing a concurrent master’s degree in Greek. “I also valued the fact that UMSI would teach me digital skills,” she said. She’s working on the online counterpart to the Literature in Fragments exhibit in a UMSI web design class. “I don’t think I’d be able to do the web design stuff if I didn’t have a professor and a graduate student instructor guiding me through it,” she said.

At U-M, Allison has been able to work in diverse roles across programs. She is currently a graduate student instructor in psychology and a fellow with the university’s Library as a Research Lab program, and she has recently worked with the Digital Conversion Unit, Michigan Publishing and the Taubman Health Sciences Library. As a student assistant for the U-M Papyrology Collection, she continues to work maintaining the collection, assisting students and scholars, and preparing for tours.

Allison said that she was surprised by how collaborative the curation process was, thanking PhD students who helped her translate academic articles in foreign languages and coworkers for their design input. “UMSI really preaches collaboration as something that will be necessary in our professional career,” she said. “I definitely got that through this experience.”

“Somebody told me that librarians become librarians because they’re interested in everything,” she said. “That really has become my life motto.” Set to graduate in the spring of 2020, Allison said she’d be happy working with literature in a special collection or research-intensive role. “There’s always something more to learn,” she said. Guided by curiosity, Allison will certainly put her versatile skill set to use for the edification of students, scholars and the public throughout her post-grad career.

Allison’s exhibit, Literature in Fragments: Lost Greek Works at Michigan, will run through December 6, 2019 in the Special Collections Research Center on the sixth floor of Hatcher Graduate Library.