From designing augmented reality (AR) interfaces for NASA spacesuits to combating voting misinformation, MSI student Matt Garvin is working from his home in Clawson, MI to turn unforeseen hurdles of 2020 into learning opportunities.

Last year, he joined U-M’s Collaborative Lab Advancing Working in Space (CLAWS) as a UX designer and Human in the Loop (HITL) coordinator. CLAWS is partnering with NASA to design an AR interface for their space helmets. His team was originally supposed to test the interface through space simulation in a lab on North Campus. However, Garvin pivoted to remote usability testing and kept the project going when campus closed in March 2020 at the pandemic’s onset.

He said, “The switch to remote work has a silver lining to it. During human space flight missions, when we put humans into space they're talking to ground control the whole time so that's a remote collaboration, too. That was something that wasn't lost on us, you know, This is a good learning experience.”

Garvin had an untraditional path to UMSI. As a first generation college student, he began his studies at 29 after working as a musician and bartender. In 2017, he graduated with his bachelor’s in anthropology from Wayne State University while working as a peer mentor and astronomy tutor. Garvin then spent two years working as an account manager for a freight and transportation audit company. 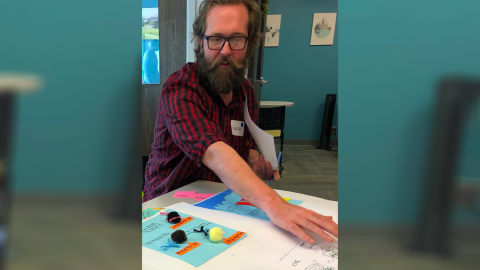 Having always been interested in computers and hacking, Garvin wanted to utilize his education in people and the environment to better understand the connection between technology and human usability. Information Studies entered his radar after watching the TedTalk called “We are all cyborgs now” by Amber Case.

Garvin said, “[The TedTalk] really changed my perspective on how I was thinking about modern ‘smart’ technology. Interestingly, the term ‘cyborg’ was coined in reference to astronauts, so it’s kind of fitting that I would pursue projects related to human space exploration.”

In addition to CLAWS, Garvin is working on the Bioastronautics and Life Support System (BLISS) student team as a conversation designer to create an AI voice assistant for NASA’s Gateway, an international space station orbiting the moon which will be capable of unmanned autonomous operations for up to three years. He’s also designed his master’s thesis research around studying the emerging role of human-computer interaction in the field of human space flight technologies.

While the pandemic has impacted how he’s conducting his space studies, it’s also inspired him to prioritize community activism. For his SI 538 Citizen Interaction and Design course, he’s working with the Michigan Department of State on their Voting Matters campaign to combat voting misinformation and increase voter turnout in the state’s 40 districts with the lowest polling numbers. The project is especially interested in enabling returning citizens to vote after incarceration. The pandemic is making connecting with these citizens more difficult as the nonprofits serving them have had to close their doors, so Garvin is working on solutions.

Though the two areas of interest are different, Garvin sees a profound connection between both his space-centered and voting work. He said, “If we don't address our sociocultural issues, like our relationships with each other and our relationship with our environments, we're just going to export those patterns of behavior throughout the solar system and our technology.”

When Garvin is not in classes he’s hanging out with his seven rescue animals, reading or taking MOOCS. However, he spends much of his time involving himself in his U-M community.

Studying at U-M is a lifelong dream for Garvin, whose first job out of high school was as a custodian at a U-M hospital. He chose UMSI for its interdisciplinary approach and is preparing a PhD application in the hopes of furthering his education at the school after he graduates in Spring 2021.