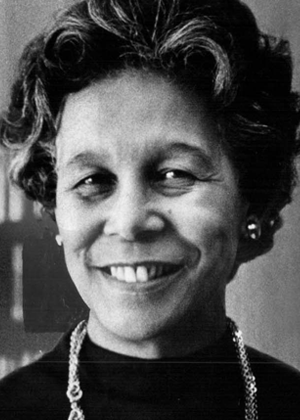 Clara Stanton Jones (1913-2012) was the first woman and first African American to serve as director of a major public library system in the United States. In 1944, she accepted a position at the Detroit Public Library, and by her retirement she had transformed libraries everywhere. With a focus on extending library services into the broader community, Clara Jones worked to desegregate libraries, library services and overall library culture by encouraging the American Library Association to pass the “Resolution on Racism and Sexism Awareness.”

Jones was active in multiple organizations throughout her lifetime, including the American Library Association, where she was the first African American President. In 1978, she was appointed by President Jimmy Carter to the National Commission on Libraries and Information Science. She was a member of the Public Library Association, American Civil Liberties Union, National Council of Negro Women and more. She also founded the discussion group Black Women Stirring the Waters, which is still active today. In 2018, she was elected to the Michigan Women’s Hall of Fame.