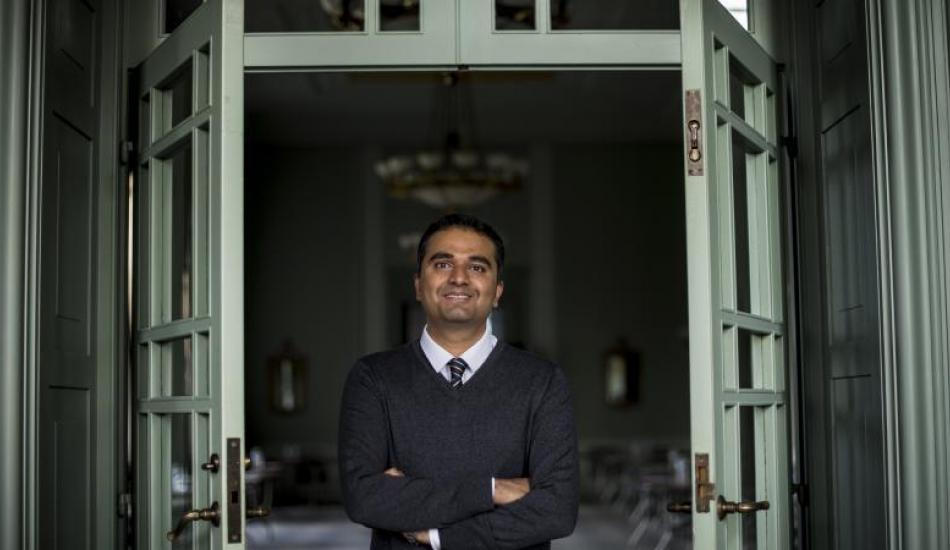 Hariharan Subramonyam is tapping into an artistic vision while pursuing research in data visualization.

Hariharan Subramonyam taps his artistic and computer and tech skills to make sense of the world around him.

It’s something he hopes to share with others. As a third-year doctorate student at UMSI, he’s pursuing research in data visualization. He’s using interactive charts to help people understand and draw their own insights from data and information. It’s the perfect blend of his passions.

“It’s about presenting data in visual form to help people better understand,” he says of his doctorate research. “You can look at an Excel spreadsheet and see numbers and not make sense of them. But with visualizations you can help people understand.”

Among his research projects is “data dialog,” a collaborative visualization tool to bring two people with different goals relating to data together to better understand the information. As an example, he points out how doctors and patients often share information with one another but often the full impact is lost. Analyzing the data they share and creating visuals can help both of them understand the interaction and, ultimately, benefit the patient.

“I try to look at the process,” he says. “I’m trying to bring two people with different goals together and understand the data.”

Hari is not new to USMI. He earned his master’s degree in human computer interaction from UMSI in 2015.  He studied telecommunications and earned his bachelor’s degree in engineering from the CMR Institute of Technology in Bengaluru, India, his native country.

He sees his research project as an extension of his interest in art, that is, combining art with information. He’s had no formal training as an artist but began painting as a child.  He has painted in oil and acrylics and describes his work as traditional Indian-style murals.

"I don’t do art anymore, but data visualization is sort of a compromise,” he says, noting he has a very busy schedule as a doctoral student

Among the reasons he chose to pursue his doctorate at UMSI was the opportunity to take course in other departments. In his search for a doctorate program, he found UMSI to be one of the few schools to allow students to do so. So far, Hari has taken courses in the Department of Performing Arts Technology in the School of Music, Theatre and Dance, where he met one of his advisors, Sile O’Modhrain, and the Department of Learning Health Sciences in the U-M Medical School.

“Having access to other departments across the university was very important to me,” he says. “It was very helpful. I already had computer programming background and wanted to explore other things.”

When he’s not busy studying or conducting research, Hari likes to explore new places, especially national parks, and hang out with friends. “I don’t have that much free time,” he admits.

Looking ahead, Hari hopes to join research faculty at an information design school, preferably in the United States. He’s inspired by the work he accomplished at Microsoft Research and would love the opportunity to work there, as well.  He doesn’t want to be part of an industry life cycle, in which a researcher works on a feature or small part of a product for months or years.

“I like the freedom to explore new ideas, test and them and move on to the next idea,” he says. “It’s sort of a natural fit. I like playing with new technology.”