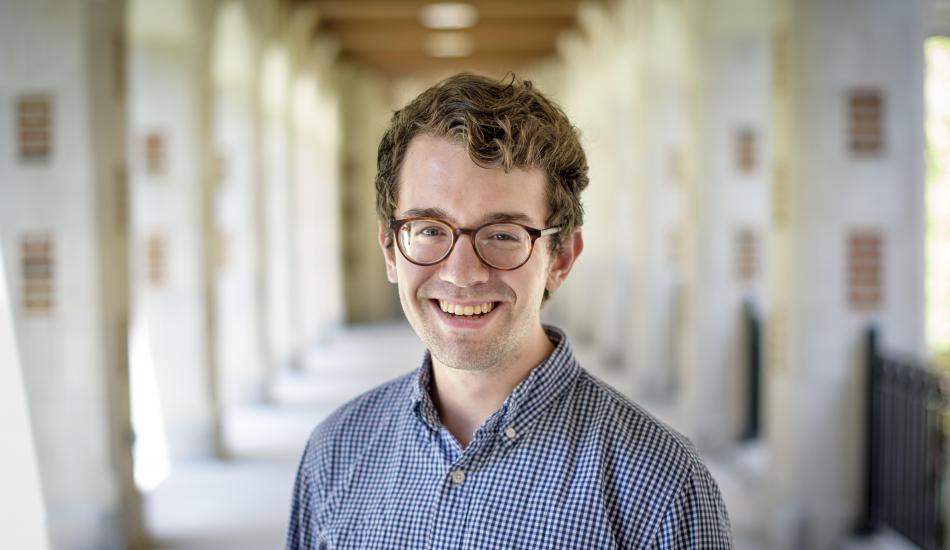 Brad Iott is studying how data about social determinants of health are standardized and collected in clinical care.

After earning his bachelor’s in anthropology and master’s of public health in epidemiology from the University of Michigan, Brad Iott returned to the university to refine the mixed methods approach to health research he developed somewhere between Michigan, Ghana and India.

Brad grew up in Monroe, Michigan and wanted to stay in-state after high school. He chose the University of Michigan. “It’s a very compelling university,” Brad said.

As an undergraduate, Brad followed the pre-med curriculum. He decided to major in anthropology because he wanted to understand qualitative approaches to research as well as quantitative ones. “Anthropology felt like a nice compliment to the biomedical sciences,” Brad said.

The university awarded Brad the International Institute Summer in South Asia Fellowship in 2012. The fellowship funded Brad’s trip to India, where he was to work for an NGO. The organization he had lined up seemed perfect. They used text alerts to help pregnant women stay on-schedule with their prenatal visits, and Brad was excited by the potential of technology to improve health outcomes.

When Brad arrived, however, the NGO had less than promised capacity to support research activity and instead needed help with promotion.

A college student in a foreign country, Brad had to figure out how to make the best of his funding. He identified a health clinic in Nizamuddin, a Sufi enclave in Delhi, made the trip, and conducted ethnographic fieldwork there. He felt his ethnographic approach was missing something. “I thought if I had some survey data or population health data, it would tell a more complete story,” Brad said.

Brad chose to stay at the University of Michigan for an extra year after concluding his honors thesis work in order to earn his MPH in epidemiology. As part of the Minority Health and Health Disparities International Research Training Program, Brad conducted epidemiological fieldwork and helped create a maternal mortality surveillance system in the Bosomtwe District of Ghana the summer before he entered the program. Again, he wished he had the opportunity to diversify his research approach. “If we were capturing interview data I felt like the story would be more complete,” Brad said.

As Brad worked toward his MPH, he discovered his emerging interest in health technology. Though he had pursued a health-focused education throughout his higher education career, the debut of personal fitness tracking devices and widespread adoption of electronic health record systems enlightened Brad to the potential of health informatics. “[Health informatics] seems like a place where I could do something positive, have an impact,” Brad said. “It was pretty clear that a mixed methods research career was calling my name, and fortunately that’s something that we do here in SI and also in health informatics.”

When Brad began working toward his PhD at UMSI, he took many health management and policy courses, which led him to pursue a joint PhD in information science and health services organization and policy at the U-M School of Public Health. “It broadens my network to expand the conversations I participate in, which I’m fortunate for,” Brad said.

Brad works on a variety of projects relating to health informatics and organizational studies. For example, Brad is working on a project to outline a decision making model for men who have sex with men who are deciding whether or not to get tested for HIV. This analysis documents how stigma impacts different steps of the decision-making process.

Brad also researches attitudes toward health and food in metropolitan Detroit using natural language processing and data from Twitter. “I think tweets are a relatively untapped source to measure the different factors that contribute to the health status of communities,” Brad said. “The nice thing about it is, if we demonstrate the method is possible, it may be a more accessible way to access the health status of different communities than traditional public health surveillance approaches that might be cost prohibitive or not have the reach.”

Brad and the other researchers on his team, including his advisor Tiffany Veinot, identify tweets containing a word relating to food and use a machine learning algorithm to classify those tweets by how healthy or unhealthy they are. The tweets contain geographical data that the researchers use to identify attitudes about health and food in specific neighborhoods.

Brad is currently designing his dissertation project, which will study how data about social determinants of health are standardized and collected in clinical care. After graduation, Brad hopes to continue to use mixed methods to uncover nuanced stories about organizations and health informatics.