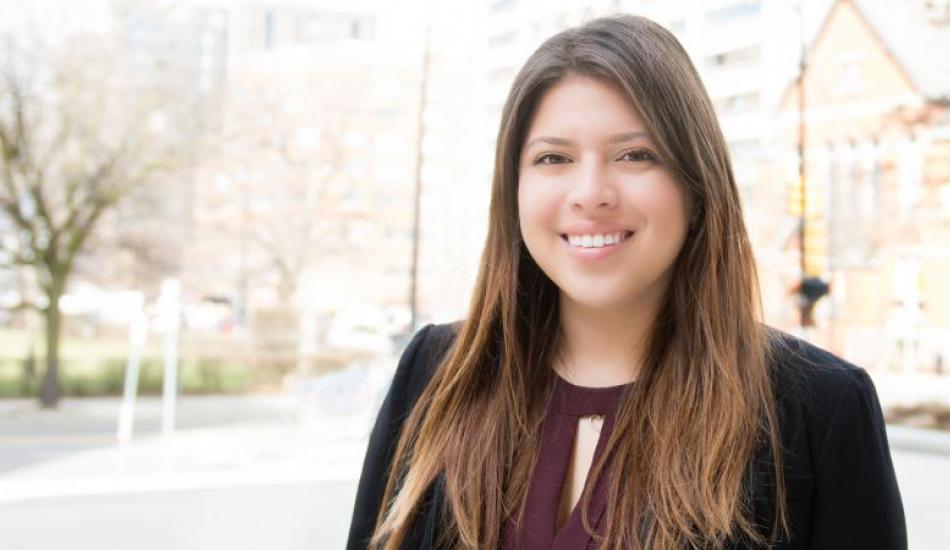 Born and raised outside of Chicago, Viviana Hernandez entered U-M with her sights set on clinical psychology. “I came to U-M with the idea that I really wanted to do research, and this school was going to provide that opportunity for me,” Viviana said.

As a freshman, Viviana joined the Undergraduate Research Opportunities Program (UROP) and began to work as a research assistant for a clinical psychology lab.

While researching ethnic identity – specifically that of Latino/as and Asian Americans – and well-being, Viviana assisted in writing two papers centered around how ethnic background can become a predictor of depression and negative life events.

“As a research assistant, I developed an interest in working with data,” Viviana said. “My advisor would let us experiment with the data on SPSS, and it really caught on.”

With her newfound interest in data, Viviana began considering computer science as an academic major, with the intent of joining her two academic interests. However, she recalls feeling apprehensive about dual majoring in psychology and computer science. “I felt that in one area, I was so driven towards people, whereas in the other, I was so far away from people,” Viviana explains. “I couldn’t bridge that link.”

“That’s ultimately how I decided upon the BSI program,” she adds. “It was really the idea about people and technology, and I felt the program combined the two so well. It went into depth about how the two disciplines integrate, whereas I didn’t feel like computer science did that, and I didn’t feel like psych did that either.”

Now in her junior year, Viviana is dual majoring in information and psychology, and minoring in statistics.

“I didn’t want to give up psych because I think it really gives you an upper hand when you understand people,” Viviana explains. “Numbers don’t mean much if you can’t tell the story behind it or understand why these numbers do what they do.”

During the summer before junior year, Viviana participated in Design Clinic, a UMSI entrepreneurship program that connects student as HCI consultants for local startups. The program matches undergraduates (“apprentices”) with master’s students (“clinicians”) in teams of 4-5 to undertake semester-long projects.

“It was a really great learning experience.” Viviana says of working with her client from the U-M School of Music, Theater and Dance. “Being able to do that really proved to me that I had learned a lot – I was able to communicate with the client, meet their needs and see what expectations they had and where I could go from there.”

As a junior, Viviana also participated in NY Innovation Trek, a two-day immersive experience where students pitch their innovative ideas before companies and startups in New York. Viviana’s team worked through an idea for a machine learning software that could standardize data input. “I really like entrepreneurship, and I think it’s really cool that we have so many resources here at the school to do those things,” she said.

Between winter semester of her sophomore year and fall semester of her junior year, Viviana served as Sisterhood Chair for Gamma Phi Beta, planning sisterhood and bonding events for all 200 women. She also makes it a priority to volunteer on a frequent basis.

“Every year, I try to volunteer with at least one place,” Viviana says. “Freshman year, I volunteered at the Great Lakes Hospice Center in Jackson, MI.”

Viviana describes how she would spend Friday evenings with her hospice patient, eating dinner and watching TV together. “It’s really fulfilling because when I go, my patient would wait to take her medication – she said it made her drowsy, and she wanted to be present for the conversations we had,” she said.

“Normally people view volunteering as helping someone or doing something for them,” Viviana adds. “But for the hospice patients, helping them is being compassionate and being a companion. That was a different perspective for me because I had never volunteered in such a way.”

As part of her philosophy for serving others and seeking new perspectives, Viviana tries to utilize the resources available on campus to explore new ideas and outlooks on life.

“Every year, I try to join a new club or experience something new, anything that appeals to what I’m liking at the moment,” she explains. “A lot of times, people are scared to try something new because it feels like they are quitting something else, but it’s really cool to see what other people do. You’re only here for four years, you’re never going to be able to experience these things elsewhere. It’s okay to change your mind because you’re never going to know what you want unless you keep doing other things.”

Following graduation, Viviana plans to attend an accelerated Master’s program in Predictive Analytics, with the goal of pursuing a career in data science.