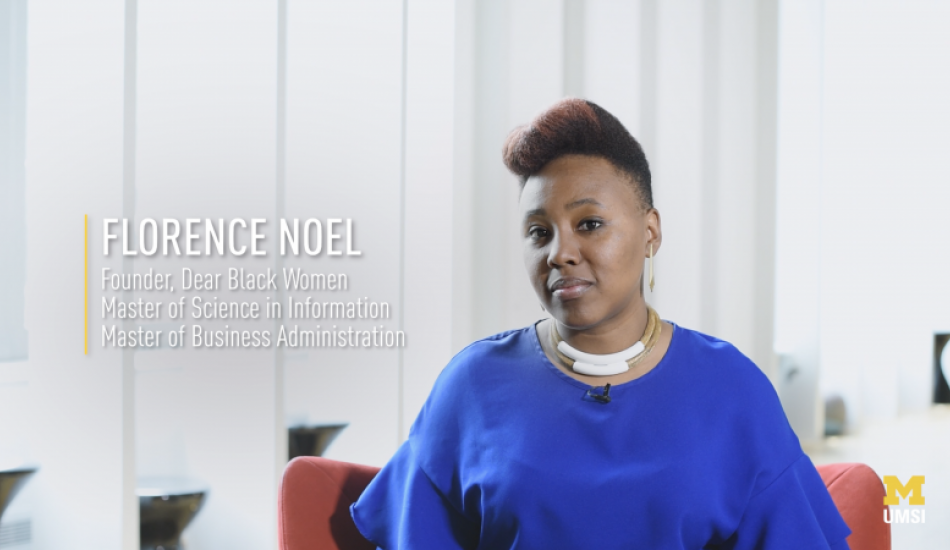 Florence Noel has provided over 10,000 families with technology training and equipment, and managed partnerships with over 80 technology firms and 200 public schools. In 2013, she was the northeast regional director for the national nonprofit Girls Who Code. That’s the short list.

She grew up in a Haitian family in White Plains, New York, “the city above the city,” and received her BA from Duke University, where she doubled majored in English and African/African American studies, with a concentration in West African and Caribbean cultures.

She’s working toward another dual degree. This time, studying at the Ross School of Business and specializing in Human Computer Interaction and Social Computing with the School of Information to obtain the Master of Science in Information/Master of Business Administration degree.

In January 2017, she founded Dear Black Women, an affirmation movement and social network for Black women. “It is designed to curate safe and affirming spaces for Black women to connect, to heal, and to grow. In so doing, we have an online community, and we have gatherings where Black women are able to discuss issues and receive support.”

Dear Black Women was born while Flo was at the University of Michigan, and without the help of the university, Flo admits, “DBW would not be where it is today.”

“I’ve been able to secure grant funding from both programs… beyond that, there’s so many resources in the way of learning, sharpening my tools to better understand how I can grow this business successfully. Add to that the fact that there are so many smart people here who are willing to sit with me and be mentors, it’s not something you find if you’re not fortunate to be in this kind of community.”

The first gathering of DBW included five people. “Through organic word of mouth, it has grown to over 500 locally.”

Currently, “there are over 4,000 women engaged with DBW across the country.” Participants range from women who are 18 years old to those in their sixties. “Some are PhD students, some grads, and some are full time moms.”

“It was clear that for me to do what I wanted to do, I’d need allies, people who believed in me, and I found that at both programs… it’s not something I can take for granted. It’s really special.”

Soon, DBW will hold events in New York City, Atlanta, and Chicago. The goal is for DBW to grow to a national platform that “deepens the offline connections already forming in circles.”

When asked if she’ll stay in Michigan after graduation, Flo jokes, “I’ve been dating Detroit for three years and I’ve been welcomed with open arms from so many communities within the city. There’s so many things happening around art, food, and culture that feel new and cutting edge and at the same time deeply rooted in tradition without the pretense of other places… So I say we’re dating, but really we’re in love.” She noted, “how organically DBW has grown here, it’s not something you can buy.”

When she’s not studying or organizing DBW events, Florence likes to dance, sing, travel, explore nature, and do yoga. She hopes to run Dear Black Women full time after she graduates, and continue her love affair with Detroit.