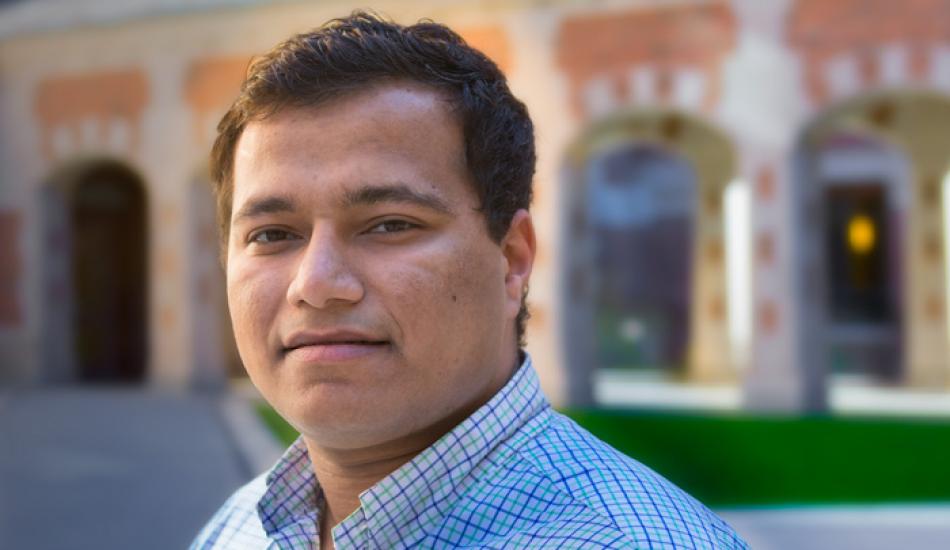 Second-year MSI student Mayank Khanna first experienced the joy of being a makerspace mentor through a particular student who is passionate about Lego bricks.

“A while back, he built something and brought it from home to show me, and I was really surprised because that kid saw me as a mentor and wanted my feedback,” he says.

Mayank had seen his mother, a principal at a school for disadvantaged children in India, have this kind of experience, but it was his first time, and he liked the feeling.

Mentoring is part of his role as a graduate student research assistant on two grants: UMSI clinical assistant professor Kristin Fontichiaro’s “Michigan Makers: Developing Leadership through Makerspace Mentorship” and Fontichiaro and assistant professor Silvia Lindtner’s “Making in Michigan Libraries.” Each week, he works with students at Scarlett Middle School in Ann Arbor, bringing various technological and other supplies into the school for them to use.

He has enjoyed working with middle school students. “It’s kids exploring stuff, and they come up with new ideas that you totally couldn’t have imagined,” he explains. He also likes that seeing young people at work brings back his own childhood memories of making or discovering things.

Mayank himself has long had the heart of a maker. At least since college, he has been doing glass and tile painting and dabbled in the art of sewing, among other things.

He graduated from an engineering school in Bangalore with a BE in information technology, but he knew before he finished his degree that he wanted to do something that utilized his creative bent. While working as a software developer after graduation, he got involved in the field of user experience. “I started realizing this is fun, and it kind of blends my interests,” he said. His interest in designing user interfaces eventually prompted him to apply to UMSI.

At the same time, a makerspace culture was developing in Bangalore, and he got involved. His experience in the makerspace community there opened up the opportunity for him to work with Fontichiaro and Lindtner.

Mayank’s other role in his research assistantship involves a project to spread the makerspace model across Michigan as part of Fontichiaro and Lindtner’s recent $499,441 grant from the Institute of Museum and Library Services. He’s part of the planning of a summer road trip the researchers will take, presenting workshops at urban and rural libraries across the state.

“We’ll be touring all over the state of Michigan, so this summer road trip will build the vibe of maker culture within local communities and inculcate that in libraries and their broader communities,” he says. They want to show that a makerspace is more than just buying a 3D printer, he explains. “We’re trying to see how we can build a space around local needs so it’s more sustainable.”

Makerspaces are important because they can be different things to different people, Mayank says.

“For kids, it’s a different opportunity to explore different technologies that are becoming popular and get their hands on things that they don’t have in the classroom,” he says. Adults, on the other hand, can learn to make and fix stuff that is useful to them. “Then, it also has the entrepreneurial vibe that if you figure out something interesting, you can go and promote it on Kickstarter or maybe sell it on Etsy,” he says.

While makerspaces are about building things, they’re also about the learning experience. For example, “if I have a grandfather who has a garage and is really good at working with metal, maybe people can learn from him in that space,” he says.

The element of learning is what gets him excited.

Although Mayank plans to get a job at a startup or midsize company after graduation, probably doing interaction design, he never sees himself give up making and wants to continue to collaborate on makerspaces in addition to any nine-to-five job he may have. “That part of me has come back again, and I don’t want to lose it,” he says.