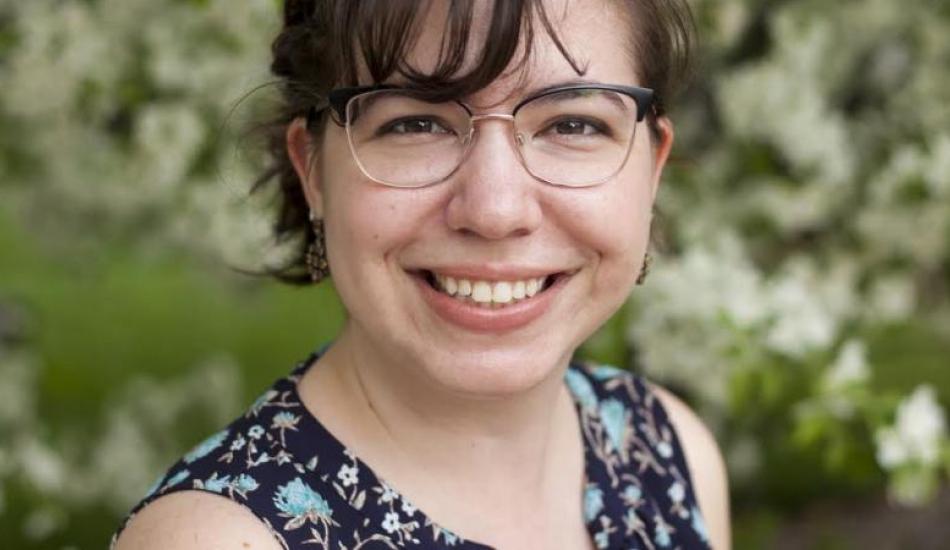 Sarah Lebovitz began her post-undergraduate career working part-time at a bakery and volunteering as an educational intern at the Colorado Springs Pioneers Museum, where she engaged children in exploring artifacts that were no longer circulated in the museum’s collection.

Exploring regional pioneer and Native American history with children is not too far afield from the pursuits of an anthropologist (her bachelor’s degree is from Colorado College), but Lebovitz was uncertain what kind of career she would ultimately pursue. Her short tenure at the Colorado Springs museum, however, proved fortuitous.

“I really wasn’t sure what I was going to do and started talking to the curator. She told me she had just been to a conference for archivists and encountered hipsters who were all intelligent and dressed like me and were very passionate about what they were doing,” she recalls, pointing out that she no longer dresses in hipster garb. “I had been thinking about museum studies but I started looking at archives and record management.”

“If I hadn’t had that position, I’m really not sure what I would be doing right now,” says Lebovitz, who is originally from Cleveland, Ohio.

Those conversations ultimately led her to the University of Michigan School of Information, where she is wrapping up her two-year graduate program in archives and record management. Her professional goal is to be an archives processor at the university level.

She credits her classes in the School of Information and experience in a variety of university roles, including student processing archivist at the Bentley Historical Library and collections services assistant at the Hatcher Graduate Special Collections Library, with cementing her decision. A two-month trip abroad last summer as a Global Information Engagement Program Fellow further ignited her passions.

Lebovitz was among 18 students who traveled to Cape Town, South Africa, to work in teams with non-profit groups on informational challenges. Specifically, Lebovitz created standardized processing guidelines and finding aid templates, and processed four collections at the University of Western Cape Robben Island Museum Mayibuye Archive, which houses materials related to the anti-Apartheid movement. Robben Island once served as a prison for criminals and anti-Apartheid activists, including the late Nelson Mandela.

“Working there was touching history in a very meaningful way,” Lebovitz says.

“It was a very meaningful experience for me, working in an environment like that,” she adds. “It really helped me decide what I’m passionate about.”

If the job of an archivist sounds like it’s one dealing with dusty, forgotten artifacts and brittle documents, Lebovitz sees the role as much more vibrant and contemporary. The role of the archivist, she notes, has evolved as American society has changed in recent decades.

A class taught by Margaret Hedstrom, a professor of information and a faculty associate for the Institute for Social Research, expanded the role of the traditional archivist in her mind. Hedstrom talked about the responsibilities cultural institutions have in describing and processing materials and included those who may have been traditionally overlooked.

“It really set the stage for what I want to do. We talked a lot about social justice and the implications on archives. What is the place of archives at research institutions and public universities in collecting and sharing these materials? It’s important to show that the government has treated people unfairly in the past and that some people have not been included in our histories. We need to bring history in context and include people who were overlooked,” she says.

For the last year, Lebovitz also has served as an officer in the UM chapter of the Society of American Archivists.

Archivists, she notes, aren’t always dealing with the past.

“We’re not living in a blank period today where nothing is happening,” she says, noting the many social justice efforts across the country. It’s important for archivists to collect and process materials related to protests and social justice movements, including posters and minutes from meetings. “It’s important the stories today get told.”