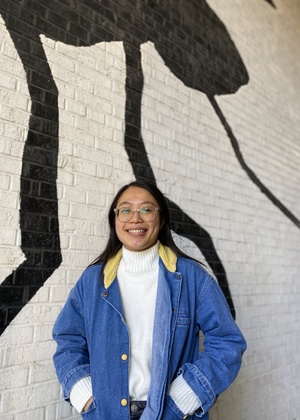 Sophomore Shannon Li has only just been accepted to the BSI program for her junior year, but her information and design skills have already gained recognition across multiple national campaigns.

Shannon, who grew up in Brooklyn in New York City, said that one thing people should know about her is that she has a lot of interests in life.

“Beyond just technology and design, I’m an activist.”

As a self-described queer woman of color, Shannon said it’s her responsibility to utilize technology and design to advocate for social justice ⁠— and she cites Brooklyn’s widespread progressivism and artistic culture as influential forces behind that creative, socially conscious drive.

Shannon began to hone her skills in high school, when she took a summer immersion program through Girls Who Code (GWC). The program, recommended by a school counselor, taught her the fundamentals of computer science through project-driven and group assignments.

Shannon said the community she found was as essential in setting her current trajectory as the skills she’d picked up.

“I have these connections I can always reach out to and I know that they’ll support me in whatever I do,” she said. “And not all of them will go into the tech field, but they’ve integrated the idea of empowering other women. It’s just great to have that support system.”

While a career in tech wasn’t in the stars for all GWC alumni, Shannon was drawn to the creativity and potential social impact of the industry. When the time came to apply to college, she was set on doing software engineering or going into something related to engineering and business.

“I ended up choosing Michigan because I knew at that moment that I wanted to go into tech,” she said.

However, an unexpected success helped Shannon realize that in order to make an impact, she needed to approach her work from a broader perspective. While scrolling through Facebook during spring break of her freshman year, she found a call for submissions for Lucky Brand’s Lucky x Love T-Shirt Design Contest.

“I was like, I have all this time and I’m sitting in my dorm with nothing to do, might as well try it out,” she said.

Shannon was one of three winners. ⁠Inspired, she quickly followed with a winning phone case design for Built By Girls’ Make My Case Design Competition.

“That was the first time where I realized I want to make this shift,” she said. “I just needed a view that was more interdisciplinary … I saw that I was able to make an impact, which is my own personal goal, but it’s also a really rewarding experience and something that I can see myself growing through a lot. I’m willing to take on the challenges and make every effort to improve with designing.”

During this time, Shannon had been maintaining ties with Girls Who Code as a member of U-M’s Girls Who Code College Loop. She spent time encouraging high school students to get involved with the program by sharing her own experiences.

One GWC alumni coordinator connected with Shannon and recognized her as a prime candidate for an exciting opportunity to design the website for Olay’s Super Bowl LIV campaign, #MakeSpaceForWomen.

“She reached out to me and three other girls who were part of Girls Who Code,” Shannon said. “Procter and Gamble wasn’t that far from here because they’re in Ohio. I was like, why not?”

Shannon and her teammates spent one long January day in Ohio collaborating with Olay’s engineers, designers and creatives to create the campaign’s website.

“It was a very rewarding and fun experience because it was good to see from start to finish, and also the back end of things,” she said. “You never get the opportunity to see from such a big, well-known skincare company how they build their website, to see how it functions.”

Now that she’s back at school, Shannon is thrilled to be accepted into the BSI program for next year.

“I hope to do more projects focusing on design, but also its intersection with social activism,” she said. “I do want to become a product designer and help improve a company’s products by making their design more inclusive and accessible.”