When public figures are accused of perpetrating prejudice, they often apologize. Whereas an apology may indicate to some that the perpetrator has changed and deserves forgiveness, other onlookers may continue to condemn them. What predicts condemnation, even when a perpetrator apologizes? In the present paper, we explore two factors that may jointly lead to this bias intolerance: Strong motivation to address bias coupled with beliefs that bias cannot change. Across five studies, we examined White and straight participants’ (N = 1,617) evaluations and condemnation of an apologetic ingroup perpetrator of anti-Black and anti-gay prejudice, respectively, as a function of beliefs that bias can change and motivations to address bias.

Whether measured or manipulated, greater belief that bias cannot change predicted evaluating the perpetrator as currently more biased and believing they would be more biased in the future, compared to belief that bias can change. This relationship was not moderated by motivation to respond without prejudice. Believing bias cannot change did not straightforwardly predict greater condemnation. Among participants who believe bias cannot change, those who were internally motivated to respond without prejudice were particularly likely to be “bias intolerant.” We also considered additional factors that might shape evaluations and condemnation of past prejudice and found that participants’ collective guilt was related to both greater prejudice evaluations and greater condemnation. By signaling anti-prejudice norms, bias intolerance has the potential to reduce the expression of prejudice. 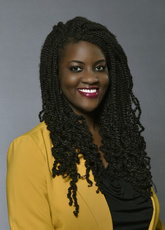 Ivuoma Onyeador is an Assistant Professor of Management and Organizations in the Kellogg School of Management at Northwestern University. Her research examines how dominant and non-dominant group members reason about group-based discrimination and disparities. Through her research program, she aims to increase people’s understanding of and willingness to address inequality.

Professor Onyeador’s research has been published in leading journals such as Psychological Science and Personality and Social Psychology Bulletin. Her work has also been featured in popular press outlets, including The New York Times and The Atlantic.

Professor Onyeador earned her B.S. in Psychology, with distinction, from Yale University, her Ph.D. in Social Psychology at UCLA, and was awarded a postdoctoral fellowship from the National Science Foundation.