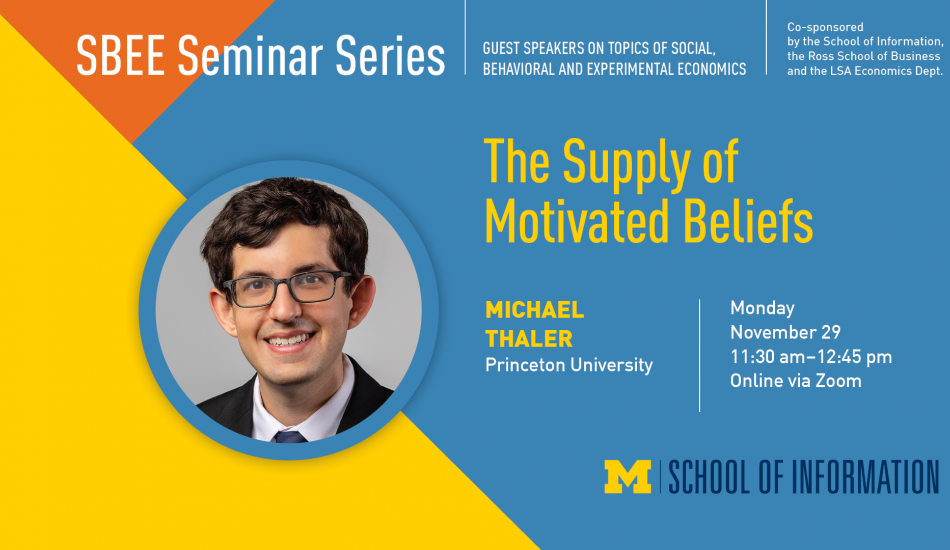 The Supply of Motivated Beliefs

When people choose what messages to send to others, they often consider how others will interpret the messages. In many environments, particularly in politics, message receivers engage in motivated reasoning, distorting how they process information in directions they find more attractive. This paper uses two online experiments to study what information senders choose to send to receivers on topics that evoke politically-motivated beliefs.

Experiment 1, conducted using a sample of social media users, studies the effect of incentivizing senders to be perceived as truthful. These incentives cause senders to send less truthful messages. With these incentives, senders send more false information when it aligns with receivers' motivated beliefs, even controlling for receivers' current beliefs. Receivers do not anticipate the adverse effects of senders' incentives.

Experiment 2 isolates the role that motivated reasoning plays by constructing an environment in which receivers assess the truthfulness of messages from a computer and senders choose which message to be paid for. Senders predict that politically-motivated reasoning impacts receivers' inference, they demand information about receivers' political preferences, and they use the receivers' politics to strategically choose less truthful computer messages.

Michael Thaler is a postdoctoral research associate in experimental economics at Princeton University. Dr. Thaler's research is in behavioral, experimental and political economics. His research explores the causes and consequences of biased beliefs and political polarization. Much of his work studies motivated reasoning, a behavioral bias in which people distort how they process information in directions they find more attractive. He is on the academic job market in 2021-22.

His job market paper explores how people communicate with others in settings that evoke motivated beliefs. The paper experimentally shows how incentivizing information providers to be perceived as truthful can lead to fewer truthful messages sent, as providers bias their messages to appeal to the motivated beliefs of message recipients.

In complementary work, he has developed a new methodology to experimentally detect motivated reasoning and has applied this methodology to study the relationship between motivated reasoning and political beliefs, gender differences in confidence, and optimism. He has also studied the impacts of political polarization in public health behavior as well as other belief-based biases in information processing. He received a PhD from Harvard University in 2020 and was awarded the Martin Award for Excellence in Doctoral Research in Business Economics.