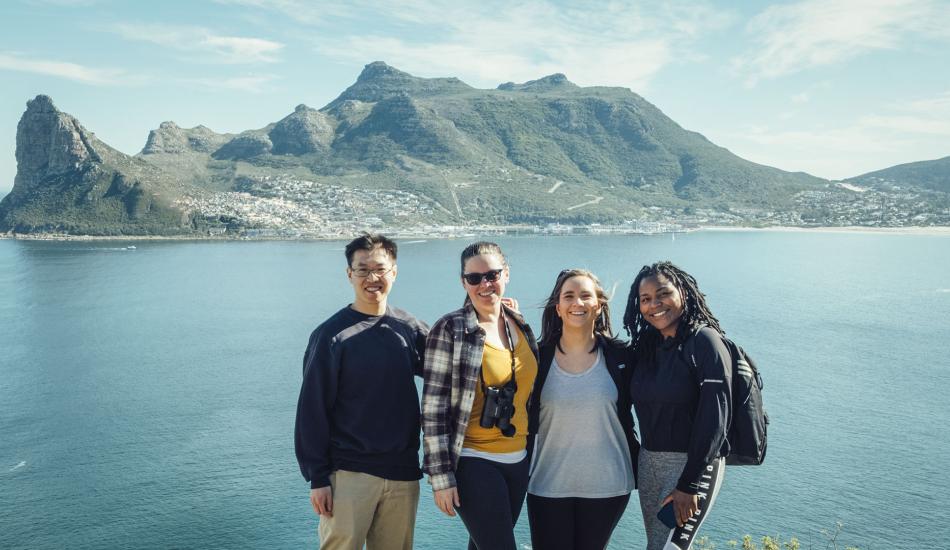 The Global Information Engagement Program (GIEP) is an innovative approach to service learning that has a far-reaching effect on both student participants and the diverse communities they serve. In carefully selected interdisciplinary teams of three to four, U-M master’s students partner with international nonprofit, research and educational organizations. These teams are tasked with developing their partner organization’s information practices, enabling them to more efficiently and effectively carry out their missions.

Every summer since 2016, GIEP students have traveled to Cape Town, South Africa for eight weeks of fieldwork involving development of interactive web-based services, digital design projects, data analysis and informatics, and more. UMSI is celebrating GIEP as it enters its fifth year working with nonprofits in South Africa with a look at some of the exceptional projects students have implemented throughout the program.

Many returning GIEP students describe encountering the cultural reverberations of South Africa’s history. “Though geographically beautiful, Cape Town is a complicated space with a history that continues to define its present,”  said Marble Karuu, a 2019 GIEP participant. “As a black woman, I could not help but notice the marginalization of blacks and coloreds. ... I did not expect divisions due to race and class to be so visible in my everyday life.” Social organizations in South Africa work to direct disparately apportioned resources to underserved populations and amend some of the gross inequities wrought by apartheid and lingering racial prejudice. Through GIEP, U-M and UMSI students are able to lend their information technology skills to services and social campaigns making vital contributions to South Africa’s present and future.

GIEP provides students with the important opportunity to base their work in extended onsite contextual inquiry that delves into both organizational and national culture. Verena Getahun (MSI ’17) said that when her team began working with Haven Night Shelter in 2016, onsite research revealed problematic variation in staffing and practices across the nonprofit’s fifteen Cape Town-area shelters. Students were especially concerned by unstandardized use of Haven’s registration system to intake homeless clients, many of whom were feeling the effects of the country’s race and class divisions. The group adjusted their project scope accordingly, shifting plans to hold a series of staff training sessions on the client registration system to writing a comprehensive user manual on the system itself.

Such a geographically extensive organization as Haven Night Shelter continuously faces information problems centered around standardization and cohesion, and the GIEP groups that worked with them in 2017 also spent time bringing Haven’s shelters into sync. Erin Bagazinski’s (MHI ’18) group compiled social workers’ individual lists of local resources in a searchable, centralized community profile. “Our hope for the project was that the information tool would become essentially a ‘community garden,’” said Bagazinski, “with the social workers providing updates as if they are planting seeds and the head office making changes to the centralized information tool as if maintaining and caring for the plants.” The community profile ⁠— accessible through Haven’s website here ⁠— enables social workers to easily refer to the master list of local resources and spend more time directly helping clients.

The League of Friends of the Blind (LOFOB) was another nonprofit suffering from lack of standardization during GIEP’s first years in South Africa. The 86-year-old organization, which provides independence development services to thousands of people from all over South Africa and the African continent, was struggling to manually collect and manage an overwhelming paper-based system. With students’ help, LOFOB sought to digitize and streamline their information processing.

“After a lot of time contextualizing the work environment and how information flowed through it, we identified several pain points related to LOFOB’s client on-boarding process,” said 2016 GIEP student Dalton Simancek (MSI ’17). His group redesigned LOFOB’s workflow with Google Docs-based tools to aid information collection during new client enrollment. Recognizing that the new process would be unfamiliar to staff, students offered as much training as they could while onsite to ensure the project’s sustainability. The students left Cape Town, said Simancek, with the hope that they helped LOFOB take a significant step toward greater digitization.

Over the next couple of years, GIEP students designed marketing plans and pre-made graphics, including posters, flyers and social media templates, for LOFOB. By 2019, LOFOB’s website needed an upgrade to reach more sets of stakeholders digitally.

“The organization needed to leverage modern ways of communicating in an innovative and connected way to relay outward their organizational image and goals to attract new people and funding sources to the organization,” said 2019 GIEP student Ian Geiman. His group worked through the information architecture of LOFOB’s main and offshoot websites (for The Blind Buddy Campaign and Africane Training Academy) based on conversations with stakeholders before designing and developing them. “Closer to the end of the development cycle,” Geiman said, “we worked with LOFOB to train employees to know how to edit and maintain the website so these sites could be sustained after our time in South Africa was done.”

Prioritizing sustainability, GIEP groups prime organizations to continue expanding their reach and developing their services. From streamlining information processing to building online brands, Haven Night Shelter and LOFOB have undergone drastic digital evolution. Numerous other Cape Town-based organizations have also harnessed the power of information through the program ⁠— like Mayibuye Archive, which developed social media strategies to publicize artifacts of the country’s freedom struggle, and District Six Museum, which turns to oral history to vindicate voices of Apartheid.

Chrischené Julius, manager of the Collections, Research and Documentation Department at District Six Museum, worked with GIEP students to translate their archive of personal stories into an online experience. “The benefits of this kind of project are often intangible,” said Julius. “Voices that are not part of the official record are illuminated.” Applying UMSI values surrounding contextual inquiry, cohesion and community, and sustainability, GIEP students are helping South African nonprofits bring peoples’ voices to new audiences and processes through technology.

Interested in joining GIEP? Students can apply via MCompass by late January.