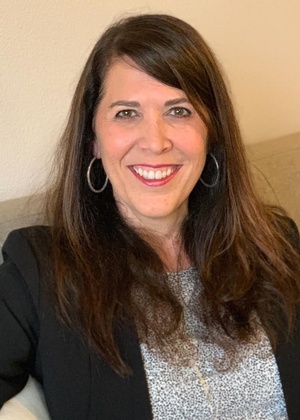 Marla Gomez (MSI ’04) has built a tremendous career at Intel since her graduation from UMSI, rising through the ranks of the corporation’s IT User Experience division to become manager and Principal Engineer (PE), an honor reserved for about 1% of Intel’s engineering workforce.

Now, she has some insight and advice for students and recent graduates of UMSI looking to launch their own careers in user experience and user interaction (UX/UI) design. The first piece of advice: You’re in the right place.

“UMSI was just a lovely time,” said Marla. “Different kinds of people, really good diversity of backgrounds, diversity of thought, diversity of education. The kind of environment where we could all learn from each other.”

Taking on Technology at Michigan

“I came to technology later in life,” Marla said. A lifelong Michigander, she initially earned her BA in developmental politics and the environment at U-M before doing some work in environmental education and communication; however, she said she was “a little bit lost” when she came out of undergrad.

“I was in my thirties at the time when I got a true technology career,” Marla said. Back at the University of Michigan ⁠— as an employee this time, not a student ⁠— her first foray into the world of IT was as a computer systems consultant at the turn of the millennium, when the university was rolling out PeopleSoft and transitioning to online registration. As frontline support, Marla took on the new technology and guided university employees with patience.

As she worked creatively to solve their issues, looking at the computer systems in innovative ways excited her. So when she realized that solving these kinds of problems was a career field in and of itself, Marla decided to pursue it.

“Seeing people's frustration with technology and fear of technology is what drove me back then, so that's how I ended up at UMSI,” she said.

Frustration and fear: Marla, a single mom working her way through grad school, was dead set on solving these problems for people who needed to be able to work with technology to thrive in their daily lives.

And with a full ride from UMSI and a Rackham fellowship, Marla was able to leave her job at the university to focus on her studies. Facing new challenges, she said she found nothing but support from her close cohort of fellow MSI students on the human-computer interaction track.

“I just never felt like they treated me differently for being a single parent,” Marla said. “They were very understanding around scheduling certain things, or even sometimes I had to bring my daughter to study sessions or group things and she would sit there and read and color. She was five at the time, so she got to know some of the people from my classes. I just really felt supported the whole time.”

While Marla was working through her classes, her future at Intel was waiting for her, tucked away in a folder labeled “Jobs” on her computer.

The folder contained a dozen or so “interesting” job descriptions and write-ups Marla had collected over months, including an article about Intel’s sustainability efforts that spoke to her environmental passions. The article was enough to inspire her to search the corporation’s website for openings, and soon, she was getting her start at Intel doing UI design, usability testing and user research.

“It gives me chills to think about how that article landed me at Intel,” she said. “I had no connection to a company like that that manufactures chips and develops technology.”

But staying tuned in to her values as she searched for a place to launch her career paid off, and attuning herself to her strengths was the next step toward extraordinary career growth for Marla.

“A couple of years in I realized that I was frustrated at being brought in when software was either already being designed or had already been designed and they wanted me to tell them what the problems were,” said Marla. “So I got involved on the UX research team, and that ended up being kind of my forte, being way out in front in the early part of the strategy.”

Playing to her strengths around strategy, ideation and communication over the years, Marla kept growing at Intel, becoming research team lead and then manager of the overall UX function for the IT department.

Hot on the heels of her promotion to manager was a promotion in February 2021 to Principal Engineer (PE), a role reserved for the deepest of technical experts who have a significant impact on their technology area. PEs must also demonstrate strategic contribution and serve as role models and mentors within the organization, according to PE Cathy Spence via Intel’s IT Peer Network.

Marla, who has also served as president of Intel Latino Network Oregon and supported events geared toward STEM for under-represented minority kids in the Portland, OR area, also recognized the value of collaboration as a learned skill in her rise to PE.

“I think at UMSI I definitely learned collaboration,” said Marla. “We had to build things together, we had to write sections of reports that would flow together. Some of us would do the usability testing and then we worked with the designers. That’s very much how many tech companies operate.

“It kind of gave me that foundation, because I had never really worked that collaboratively before UMSI. So I would say that’s a big strength of how UMSI runs the program, in helping people understand how to do that.”

Now in turn, Marla offers counsel to UMSI as a member of the dean’s External Advisory Board, a distinguished group of nationally recognized information-related experts from business and education. The board meets each spring and fall to discuss matters related to a wide range of topics, including research initiatives and curriculum development.

Naturally, some of Marla’s top advice now for people looking to break into the field of UX design is to keep working on your soft skills, especially collaboration ⁠— because technology, Marla said, is an interactive sport.

“This is a team sport, and the better you learn about yourself and what your strengths are as well as being able to step back when other people have strengths and learn from them ⁠— that’s going to be really useful in your career and help you grow,” she said.

Here’s Marla’s best advice for UMSI students looking to launch their UX careers. It’s a valuable look into the hiring process from a PE’s perspective: