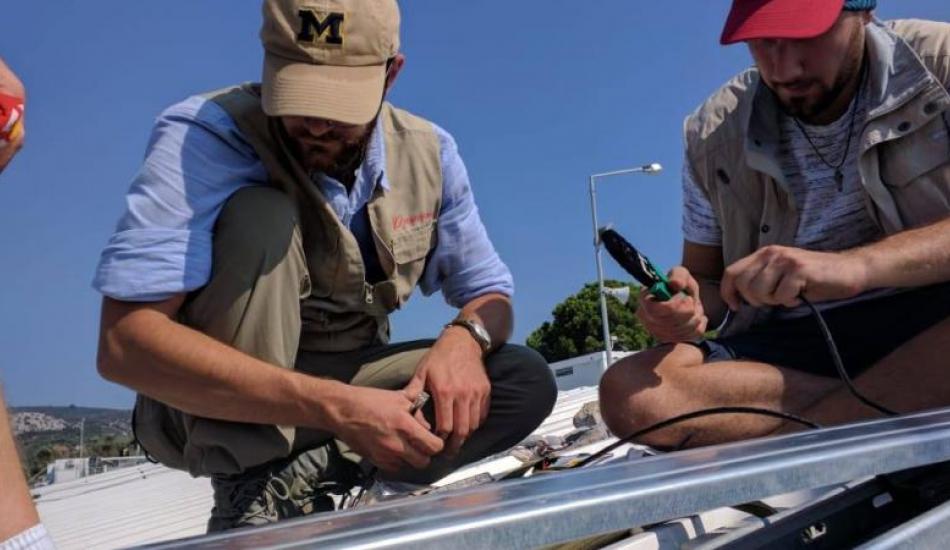 University of Michigan School of Information graduate student John Traylor knew the work he was doing in Puerto Rico to shore up communications infrastructure some nine months after Hurricane Maria was important, but it wasn't until the project was finished that he fully understood the impact.

That's when one of many residents who routinely came by as the team worked, speaking Spanish and uttering one very recognizable word—"Wi-Fi"—delightedly held up a device.

"He came to us with a picture of a little girl—I assume a daughter—and he was so happy," said Traylor, who is pursuing a master's degree at the U-M School of Information.

This was not the first "aha" moment the Indiana native experienced while doing humanitarian work. It was a couple of years earlier when working for an anti-malaria committee in the Peace Corps that Traylor realized he could combine his interest in technology with a desire to help underserved populations.

Traylor, a Paul D. Coverdell Fellow in the Peace Corps and an international relations/French graduate of Butler University, served as a bed-net distribution coordinator in Benin, West Africa. His role was to document potential cases of malaria and deliver preventative bed nets to families in need. He found out that someone on a team that preceded him had developed an app for tracking cases of the disease, and was impressed with the idea that such technology could be used in the field.

Fast forward a few conversations, and people told Traylor he needed to meet a man named Ed Happ at the U-M School of Information.

Happ, an executive fellow at the school who has worked with a number of nongovernmental organizations over the years, teaches a course in crisis informatics, which addresses the importance of communication in a natural disaster or humanitarian effort. He is an expert in how technology can benefit NGOs and other nonprofits.

Happ is also the co-founder, leadership fellow and former chairman of NetHope, a U.S.-based consortium of more than 50 leading international relief, development and conservation nonprofits focused on information and communications technology and collaboration. He has held senior management positions with the International Red Cross and Save the Children.

It was through a U-M internship program directed by Happ that Traylor traveled to Puerto Rico, Greece and Italy, working with a group called Mercy Corps to bring technology to underserved populations.

In Puerto Rico, it was an effort to restore the technological grid downed by Hurricane Maria. But more than just repair, this time the team was putting in place an infrastructure they hope will withstand any future weather events.

"We're trying to set up locations where people will be able to go and connect to a public Wi-Fi network," Traylor said. "We want to provide access to information and communications in case of future hurricanes. These lines of internet access could provide anything from information about clean drinking water, to FEMA resources, to simply the voice of a loving family member."

In both Italy and Greece, Traylor did similar work fixing and expanding Wi-Fi networks in a number of refugee camps.

"The technical skills I learned on my deployments and the relationships I've made have already guided me towards an exciting new career," he said. "I'm so happy to have had this opportunity to not only learn, but also to make real change. That said, I think the work has just begun."

In fact, back at school since last fall, Traylor and Happ have been working with an organization called Telecom4Good to launch a connectivity lab.

implementing networks in environments like disaster areas and refugee camps. The connectivity lab is part of a larger crisis informatics lab, in which students are exposed to disaster simulation scenarios.

The connectivity lab is a resource that students can use to learn about network engineering in the context of a disaster scenario or humanitarian effort. The lab affords a hands-on experience to students by providing both equipment and expertise.

"We had opportunities to fly drones, make satellite phone calls and experience disaster simulations in the course," Traylor said. "The lab is a totally hands-on experience—configuring networking equipment to accomplish various goals and accomplish specific tasks that could arise during a disaster response."

NetHope and Telecom4Good have outfitted the lab with equipment commonly used by disaster responders from organizations like NetHope and Mercy Corps and response teams from tech companies like Cisco. In cases of emergency, the equipment gets deployed to establish internet connectivity for local populations as well as other response teams.

An M-Cubed project underway this semester involves a triage exercise for the lab using AR/VR (augmented reality/virtual reality). Happ has teamed up with AR/VR expert Michael Nebeling of the School of Information and Michelle Aebersold of the School of Nursing. Michael Hess, solution architecture lead and adjunct lecturer at the School of Information, provides technical guidance on network engineering fundamentals, as well as more advanced topics like integrating equipment from different vendors.

"The connectivity lab is still in its infancy as this is the first semester it's come up and running," Traylor said. "We've still got a lot of work to do, but we're happy with how far we've come."