Pal: Why Indian companies are loath to speak out against social injustice 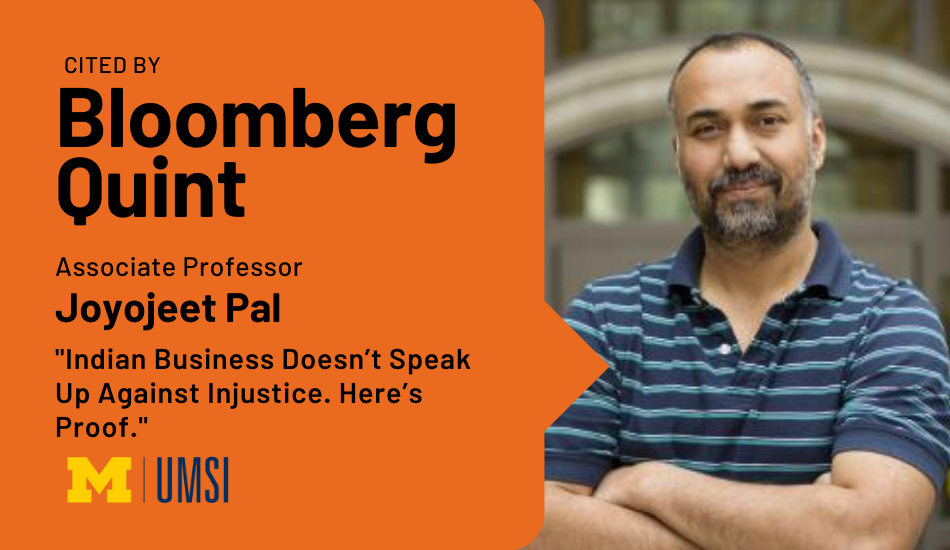 Bigoted outbursts directed at employees of Indian companies occasionally receive rapid condemnations from company representatives on social media. These rebuttals are examples of corporate activism, and can be seen as a way to encourage social change.

But how often do these public displays of support occur?

Bloomberg/Quint published an editorial by journalist Priya Ramani on how, and how often, people in power speak out on political and social injustices. She drew on research studies from University of Michigan School of Information associate professor Joyojeet Pal and colleagues that looked at how the privileged — the wealthy, famous, or company executives — reacted to hate crime behaviors.

The researchers showed that in India, CEOs tend to give platitudes rather than directly speaking out. “While the Indian side is good at paying lip service on abstract themes such as gender, sustainability and justice in a generalized way, the American side is very outspoken on specific instances of hate crimes,” said Shehla Shora, Microsoft Research India and a co-author of the research.

Ramani noted that the research from Pal and his colleagues points to a very clear motivation for the social media silence. “The costs of speaking up against the state and the government in power have different socio-economic costs in the U.S. and India.”